Through a Lens Darkly (54): Preserving a Fading China

You may not know her name, but if you have any interest in modern Chinese history, it is almost certain that you have seen her photographs. Hedda Morrison (1908-1991), while not acknowledged as a leading artistic photographer during the prime of her career, had almost unprecedent opportunities to explore and photograph what she considered to be vanishing aspects of Chinese culture during the 1930s and 1940s.  Images of traditional handicraft workers, and portraits of women and mothers, have proved to be among her most popular subjects. Since the 1980s (when many of her most iconic images were finally published in two important collections) they have increasingly come to define “traditional” Chinese life in the popular imagination.

Best of all, the occasional martial artist, street performer and weapon smith all make appearances in her photographs.  Morrison did not actively seek out these more sensational themes.  In fact, soldiers and other “martial” subjects make relatively few appearances in her catalog.  Still, she did photograph these subjects when she encountered them leaving us with not just an invaluable collection of images, but also important clues as to the social context of these practices.  Yet who was Hedda Morrison?

Hedda Hammer was born in Stuttgart in 1908 and it was her German heritage that first inspired me to take another look at her catalog of images. While researching the global understanding of Chinese martial arts during the Republic period, I became interested in the work of both private citizens and agents of the German government in shaping the image of China on the world stage. While few of Hedda’s photographs tackled explicitly political subjects, the turbulent politics of the period certainly shaped her career.

At the age of three Hedda was struck with Polio, then a common childhood disease.  Despite an operation as a teen she would walk with a limp throughout the rest of her life. This is an important piece of background information as it illustrates something about the texture of a life spent in exploration. After completing high school her parents sent her to the University of Innsbruck with the hopes that she would take up the study of medicine.  The subject proved to be uninteresting to her and, being an avid amateur photographer, she eventually transferred to the Bavarian State Institute for Photography in Munich.

Following her graduation in 1931, Hedda took jobs as photographic assistants in studios in Stuttgart and Hamburg.  However, she felt hemmed in by a lack of economic opportunity and was alarmed by the rise of the Nazi regime.  Looking to make a personal change she accepted an offer to direct the German run Hartung Studio in Beijing.  She explored and photographed the city until the Japanese invasion in 1938. Her German passport proved valuable during the early years of the occupation, but due to the deterioration of the situation in the capital she decided to leave and take up work as a freelance photographer.  This choice initiated a seven-year period (1938-1946) of almost constant travel which must be considered among the most fruitful phases of her career.  Most of the photographs discussed in this post were actually produced between 1935 and 1945.

Rather than attempting to capture the rapid social and economic transformation that was already underway in cities like Beijing, Hedda trained her lens on “vanishing” aspects of traditional Chinese life. Many of her photographs have a strong ethnographic flavor, and they often treat their subject with a degree of sympathy or respect.  At times this seems to border on romanticism. Indeed, Hedda’s empathy as a social observer grounds her approach to photography. Perhaps that is why her portraits are always more powerful than her numerous landscapes or architectural collections.

In 1940 Hedda met the British ornithologist Alastair Robin Gwyn Morrison and the couple were eventually married in 1946. They initially planned to live in Hong Kong, and some of Hedda’s best images of market and street culture were taken during this short interval.  However, Alastair accepted an appointment in the British Colonial Service and the two were transferred to Sarawak where they would spend the next 20 years.

Hedda continued to work and go on personal expeditions throughout this period producing thousands of photographs, but those are more likely to be of interest to students of the South East Asian Martial Arts. Eventually she retired to Australia where she remained active in the photographic community until her death in 1991. Many of her most important Chinese images where not published in collections until the 1980s.

Hedda Morrison’s long career produced a veritable mountain of important historical, artistic and ethnographic material.  Her final catalog of tens of thousands of photographs and over 60,000 undeveloped negatives (most of which were medium format) were donated to Harvard and Cornell.  The Harvard library has digitized much of this material and made it freely available online.  They seem to have gotten the bulk of the material produced in China during the 1930s and 1940s.  Cornell’s collections have not been as extensively cataloged or digitized. The library catalog suggests that most of her work in Special Collections pertains to her period in Sarawak and other travels in South East Asian (Vietnam, Thailand, the Philippines). Sadly, I have yet to find the time to pull this collection and go through the various albums, but I am sure that the exercise would be fascinating.

Given the vast size of her catalog, this post will introduce only a small selection of Hedda Morrison’s work. In 1935 she traveled to Hua Shan, an important mountain in Daoist tradition, yet one that was remote enough that it was (until recently) relatively free of tourists.  However, it did possess multiple Daoist sanctuaries complete with priests and students. Hedda recorded two of these individuals carrying out a “traditional dance” in which one participant armed with a jian attacked another with a fly whisk.  Hua Shan has been associated with a number of martial traditions since at least the Ming dynasty.  Unfortunately, the catalog contains no additional information about these individual’s affiliation or practices.  Perhaps a deep dive into her papers and notebooks might reveal more information about this incident.  But in any case, visitors to the Harvard digital collections can see the complete photo album of the expedition which includes some stunning landscape photography.

Hadda also took some significant images while in Beijing, including a few that we have previously seen on this blog.  Readers might recall the shop signs of the city’s swordsmiths, designed to function as a catalog of the arms that they carried. On the internet photos of these signs have sometimes been erroneously attributed to Sidney Gamble, an important sociologist and amateur photographer of the period.  I mistakenly accepted that attribution in this post.  Further exploration has shown that they are definitely the work of Hadda Morrison.

Hadda also photographed marketplace performers and martial artists, as well as traditional craftsmen who were involved with the martial arts.  One individual can be seen with hooked swords, while another demonstrated his ability to pull heavily weighted bows in one of the era’s many marketplace performances. This was a standard feat for Chinese strongmen which seems to have had its roots in the imperial military examination. This last photograph is particularly interesting as it also includes a glimpse of the table of patent medicines that the performer is selling.

Also important is an extensive series of photographs showing the construction of traditional bows and the fletching of arrows by Beijing’s Republic era craftsmen.  Again, I have selected only a few of the best images from this series, but all of them will certainly be of interest to archery students.  Other images show blacksmiths and knife makers hard at work, including one great photograph of a rack of finished cleavers. Finally, the last image in this set suggests that anyone with the patience to go through boxes of notebooks, photos and negatives in the Cornell achieves may also turn up interesting material related to the South East Asian martial arts.  I have not yet attempted this feat, but the one image included here is a reminder of the rich resources that Hadda’s keen powers of empathetic observation bequeathed to future generations. 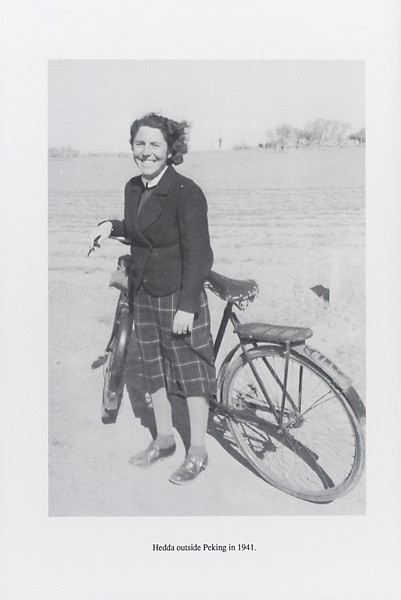 If you enjoyed this post you might also want to read: Doing Research (8): Taking Seriously the Mundane, or How I Learned that a Choke is Never Just a Choke

2 thoughts on “Through a Lens Darkly (54): Preserving a Fading China”