Through a Lens Darkly (60): The Weapons Rack

Chinese martial arts themed (or simply adjacent) postcards from the pre-WWII era are not very common.  These things certainly existed and circulated, but they are now difficult for most researchers to find. That is one of the reasons why I have tried to catalog as many of these images as I could locate here at Kung Fu Tea.

During the course of my research it has become apparent that there are at least a few readily identifiable sub-categories within this genre.  The solo “sword dancer” exhibiting his skills in either a marketplace, or occasionally a more formal demonstration, is a common figure.  The soldier or guard wielding a dadao also makes frequent appearances.  And who could forget the ever popular “kung fu kids.”

Yet another readily identifiable set of cards focuses on the material culture of the Chinese martial arts.  More specifically, it tends to examine groups of weapons.  What topic could be more exotic?

If the first set of cards are derivative of the larger “scenes from daily life” genre, I have always felt these other images are basically a variation on the architectural photographs showing China’s traditional palaces, monuments and temples, all stubbornly resisting the tide of global modernization.  Needless to say, these exotic (and supposedly timeless) scenes were among the most commonly purchased and collected cards.  I don’t think its surprising that we see some of the same cultural themes repeated in so many of the period’s visual treatments of Chinese weapons.

Nevertheless, simply getting my hands on one of these postcards proved to be something of a challenge.  Several publishers distributed a card like the one above, featuring selected pole-arms in a stand against a traditional architectural backdrop.  But for whatever reason these images and cards seem to be fairly popular with other collectors, so actually finding an example at a reasonable price took a while.  I finally succeeded about a month ago.

I particularly like how the assorted weapons in this image are arranged.  Both the shorter weapons (the mallets and maces) and the longer spears were placed in an order of descending height to giving the scene a sense of forced perspective.  The broken, slightly asymmetric, weapons rack certainly feels authentic. Still, its difficult to say much about the quality of the weapons themselves in this photo.  They were the sorts of arms that were typically carried in processions.  But by the 1920s-1930s much of this material had been relegated to either museums or the scrap heap of history.

In this case the inscription at the bottom of the card lets us know that we are firmly in the realm of the museum.  The weapons seemed to be labeled on the left, while the right half of the inscription informs readers that these are being exhibited at the Mukden Imperial Palace Museum.  Perhaps that explains the slightly forlorn feel of the image.

Within a traditional procession or temple display, a rack of assorted pole arms (and it was almost always an assortment, rather than a more militarily sensible collection of uniform spears or halberds) signaled a depth of human capital and achievement.  This was a community that had mastered the many nuances of these weapons, and hence the martial realm.  Within western popular culture that same rack of pole-arms was more likely to evoke a morbid fascination with “Chinese pirates,” and play to the perception that the people who produced such arms were both paradoxically obsessed with violence in its more primate forms, but ultimately unable to modernize themselves and master its modern varieties.  A Republic era museum commemorating both the glory and vanquishing of China’s imperial past would seem to sit exactly at the confluence of these streams of discourse. 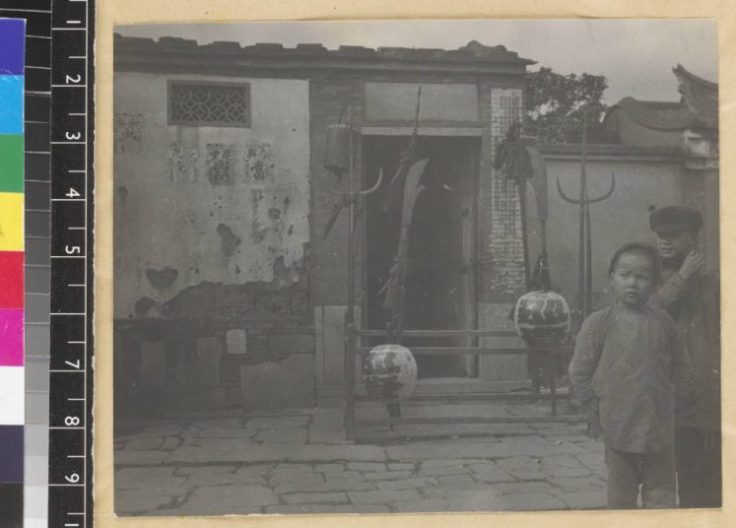 that same quality can be felt in other photos in the same genre, such as this rack of weapons in front of an old guard house in Quanzhou.  This photo was probably taken by a visiting missionary.  I personally suspect that those weapons may have been a bit more functional.  I, for one, would not want to be on the wrong end of either of those Tiger Forks.  Still, these photos were being collected and passed around because of the discursive, rather than the practical, value of these weapons.

In any case, we can easily verify the Chinese language caption on the first card.  The roof line and staircase behind the weapon rack confirms that this photo was taken in the Qing palace complex.  More specifically, it was taken just in front of the Chongzheng Hall (built, I believe, in 1627) which once housed the Emperor’s throne and office.

In conclusion, we should note that some things never change.  The Mukden Palace remains a popular tourist destination.  And just as in the Republic period, various traditional weapons are displayed on the grounds as part of the effort to interpret and understand the Imperial past. Indeed, I spent the better part of an afternoon looking at tourist photos to see if there was any evidence that the pole-arms in our initial postcard are still on display.  While I found a number of spears, sadly I didn’t find anything matched this particular set.  But there were quite a few interesting swords.  The Qing dynasty evokes very different feelings today than it did in the 1910s or 1920s.  What was once widely despised for its failure to modernize and stand-up to the West is now appreciated as cultural and historical heritage. Yet traditional weapons are still called upon to act as physical manifestations of an imagined past.

If you enjoyed this post you might also want to read: Through a Lens Darkly (54): Preserving a Fading China

One thought on “Through a Lens Darkly (60): The Weapons Rack”