Welcome to “Chinese Martial Arts in the News.”  This is a semi-regular feature here at Kung Fu Tea in which we review media stories that mention or affect the traditional fighting arts.  In addition to discussing important events, this column also considers how the Asian hand combat systems are portrayed in the mainstream media.

While we try to summarize the major stories over the last month, there is always a chance that we have missed something.  If you are aware of an important news event relating to the TCMA, drop a link in the comments section below.  If you know of a developing story that should be covered in the future feel free to send me an email.

Its been a while since our last update so there is a lot to be covered in today’s post.  Let’s get to the news!

News from All Over

You can file our first story under “Well…that happened.”  A set of European Kung Fu Championships were recently held in the Ukraine.  But the only news stories about the event that are currently circulating focus on an epic, bench clearing brawl that erupted during the Armenian/Azerbaijni match.  Follow the link for footage of the event. After reviewing the tape and various news stories I think that there are a couple of lessons that we can take away from this.

First, we can think of this as an example of “Kung Fu Diplomacy” gone very badly.  The relationship between these two countries has been difficult for years.  And sometimes mutual participation in sporting institutions can be an important step in normalizing relations and spreading a zone of peaceful norms.  That is the basic idea behind the Olympics.  But in other cases events like this can lead to a serious rethink of the wisdom of using folding chairs for seating at a fight.  Sure they are convenient for the venue, but they are uncomfortable both when sitting on them and when getting smacked upside the the head with one.  Maybe next year we will go with theater style seating instead?

Continuing with the theme of seemingly unlikely stories, multiple news outlets over the last few weeks have reported that the the UFC is currently in “advanced stage” talks to sell its fight promotion business.  Two of the bidders at the table are actually Chinese firms (Dalian Wanda and a private equity and venture capital firm named China Media Capital).   Current speculation is that this deal, if it goes through, could be be worth $3.5-4 billion USD.  One also can’t help but wonder whether a sale to a Chinese media company might solve the franchises perennial difficulties in cracking the Chinese TV market.

If our first story seemed to illustrate the dangers of Kung Fu Diplomacy, this one shows the strengths of the strategies.  A number of news stories from across Africa have come out in the recent weeks profiling local students who have won opportunities to pursue further studies in China through contests hosted by local embassies and Confucius Institutes.  In general these events seem to have focused on language training, but as I read multiple accounts I was struck by the fact that the Chinese martial arts just kept coming up as a key aspect of Chinese culture that was popular with students and actively drawing them into closer engagement with these broader public diplomacy strategies.  Maybe the best case of this to merge in the recent crop of news stories is this account of Luis Matthew who left the judges in awe with his Chinese Kung Fu performance at a Chinese language proficiency competition held recently in Namibia.  His story is well worth reading as it seems to be representative of a much larger trend that is currently underway.  Click here for the link.  It is also worth noting that this specific account seems to have been singled out for heavy distribution by the Chinese press.  [Sadly I was not able to find a picture from the winning performance.]

It looks like a new version of the Kung Fu game for Kinect is about to drop.  Check out the previous link for the announcement, a game-play trailer and a review.

In a variety of previous posts we have discussed the importance of media in attracting people, and forming their initial beliefs about, the martial arts.  A lot of this discussion has focused on Kung Fu movies as film studies scholars are a driving force behind the discussion.  But in the current era video games are an increasingly important agent in spreading ideas about the martial arts.

In that respect this game is very interesting as it fully harnesses the fantasy of entering a comic book world where it is physically possible to fight the bad guys without ever having to go to an actual school and put in the time necessary to learn from a teacher.  Its the closest thing to a martial arts game on the holo-deck of the USS Enterprise that we have yet seen.  Needless to say its hard not to think of Umberto Eco’s essay “Travels in Hyper-Reality” when watching these trailers.  In fact, I suspect that a cultural studies student could put together a pretty decent paper just on the representations of the martial arts in this set of links alone.

Of course it would be foolish to ignore the strength of the “authenticity discourse” that pervades the Chinese martial arts.  The next story taps into these currents.  Multiple Chinese news sites have reported the story of Zhong Siyuan, a 25 year old college student who turned down a potentially lucrative career to instead take up the life of a Daoist nun at the Yuhuang Temple in Luzhou (Sichuan province.)  The photo essay shows her cultivating traditional arts such as music and calligraphy, but also dedicating herself to martial arts training in stereotypical mountaintop location.  Stories like this can easily be read as reinforcing the self-orientalizing discourse that often pervades discussions of the traditional martial arts in China.  Yet at the same time they help to position the martial arts as a “cultural luxury good” that the upwardly mobile both can (and should) aspire to.  See this guest post for a little more on this phenomenon.

Regular readers will know I am always on the lookout for good Kung Fu related art.  Its a little surprising to me that the TCMA don’t generate more visual art.  As such the following story grabbed my attention, especially as it also plays into the “authenticity discourse” and makes a strong argument about what happens to the Chinese martial arts when they are practiced and appropriated by “Westerners.”

“The Kung-Fu Series by Zhong Chen” explores how Chinese cultural touchstones, like the iconic martial art, are diluted in the process of exportation and representation in Western mass media. The artist’s own experiences living in Australia inform his perspective on the phenomenon of “Western” or Anglo-Australian ideas mixing freely with “Eastern” or Chinese ideas.

Over the last few weeks there have also been news stories about another, aesthetically very different, TCMA related art project.  These images were rendered by the German artist Tobias Gremmler using motion capture technology to show patterns of movements within Chinese martial arts forms.  I noted with some interest that the project was backed by the always productive International Guoshu Association. 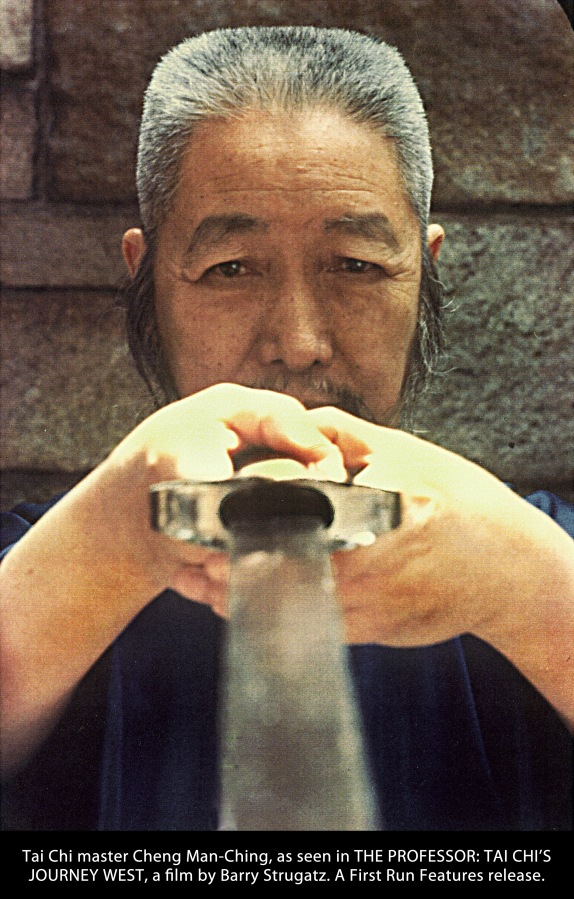 Taijiquan students, and those interested in philosophy of the Chinese martial arts and their history in North America, will want to take a look at The Professor: Tai Chi’s Journey to the West, a recent documentary by Barry Strugatz.  The LA Times wrote a short review of the film, and I reviewed it here at Kung Fu Tea as well looking at some of the issues most relevant to students of martial arts studies.  The Film Journal also did a piece on the documentary which was less complimentary but also worth taking a look at.

For those looking for a little more action in their martial arts films, we have a list of the “20 Best Martial Arts Films” courtesy of the the Movie Pilot.  For reasons that I do not completely understand, lists seem to be one of the dominant genera for generating content on the internet.  But this list is actually pretty good, and I noticed that some classic Japanese samurai films got included in the group!  Pretty much everything here is mandatory viewing (and I was even happy to see that Iron Monkey made the cut).

Finally, we have a lightsaber story.  The Syracuse Martial Arts Academy and The Gathering of Sabers recently hosted the region’s first open lightsaber combat tournament.  Fortunately the local news decided to drop by and do both a story and short video segment on the event.  You can see them here.  It is always interesting to observe the ways in which these events are discussed, and it appears that a good time was had by all!  You can follow the group that hosted this event here.

As always there are some exciting announcements for students of martial arts studies.  The first thing to catch my eye was the announcement of a new forthcoming book from Cambridge University Press that is sure to become a workhorse volume in pretty much everyone’s library.  Later this year they will be releasing an English language translation of Pingyuan Chen’s classic study A History of Chinese Martial Arts Fiction.

Here is the publisher’s blurb:

Chen Pingyuan is one of the leading scholars of modern Chinese literature, known particularly for his work on wuxia, a popular and influential genre of historical martial arts fiction still celebrated around the world today. This work, presented here in English translation for the first time, is considered to be the seminal work on the evolution, aesthetics and politics of the modern Chinese wuxia novel in the nineteenth and early twentieth centuries, tracing the resurgence of interest in classical chivalric tales in late Qing China.

I also want to remind readers that Dr. Jared Miracle’s much anticipated modern history of the martial arts, Now with Kung Fu Grip! (McFarland & Company, 2016) is about to start shipping. Miracle has been a frequent guest author here at Kung Fu Tea and he recently contributed an important article to the journal Martial Arts Studies.  Needless to say I have been looking forward to the release of this book for quite some time and recommend it to anyone interested in the history of the martial arts.  Be sure to check out his MAS article for a sample of the sorts of discussions that you will find in this book.

If you are looking for some immediate satisfaction with no shipping delay, consider checking out this blog post by Paul Bowman dealing with questions of masculinity and gender in the martial arts (specifically in the UK) today.  It is a fascinating read.

A lot has happened on the Kung Fu Tea Facebook group over the last few weeks.  We discussed some really old spear work, examined the latest translations of Taijiquan manuals released by the Brennan Translation blog, and discovered a group recreating medieval combat sports in New York City. Joining the Facebook group is also a great way of keeping up with everything that is happening here at Kung Fu Tea.

If its been a while since your last visit, head on over and see what you have been missing.