How did Boxing Influence the Adoption of the Martial Arts in America?

The history of the Chinese fighting arts in America is relatively brief and poorly understood.  While some studies of individual schools and teachers exist, I have never seen an attempt to paint a comprehensive picture of the evolution of the Chinese hand combat market.  This is a shame as careful studies of the Judo and Kendo movements among Japanese-Americans have provided a lot of interesting historical data.  They have also helped to reveal important information about the formation of the Japanese-American identity.  One wonders if at some point a similar project might be undertaken for Chinese-Americans and their fighting traditions.

Why are the Chinese martial arts relative newcomers?  To begin with there were not that many Chinese individuals in America until the middle of the 19th century (when the gold rush started in 1849).  Restrictions on immigration (particularly female immigration) would have further diminished the demand for formal martial arts training.  For much of the 19th century the Chinese population in America was overwhelming adult and male.  Traditionally martial arts training often started around the age of 8-10 and might continue through the teens or young adulthood.

Lastly was the question of intentions.  Certainly individuals with martial skills came to America.  Opera companies traveled from Guangdong and Hong Kong to perform in San Francisco.  Benevolent societies and Tongs found it necessary to hire “muscle,” especially after Chinese-American involvement in illegal gambling, drug running and human trafficking increased.  In fact, we even have some hair-raising period descriptions of how these individuals employed their skills in pursuit of their criminal goals. 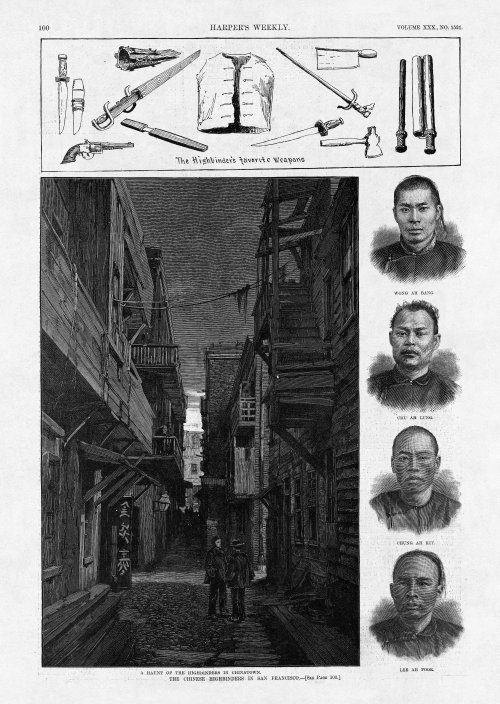 Yet most Chinese individuals in America, especially in the 19th century, seem to have had little interest in putting down roots.  Often these individuals claimed that they were interested in saving a substantial sum of money and returning to China.  While San Francisco, NY and Chicago ended up building a permanent Chinese-American community, that may not have been an obvious outcome from a vantage point in the mid-1870s.  I suspect that this sense of impermanence may have been a barrier to establishing very many martial arts schools.

Nor can we forget the small matter of timing.  There weren’t even all that many martial arts associations in China in the late 19th century.  Kennedy and Guo (2010, Jingwu: the School that Transformed Kung Fu, Blue Snake) claim that the concept of the modern public commercial martial arts school was a creation of the Jingwu phenomena, and hence it probably did not even reach most places in China until the early 1920s.  I think this overstates the case as the Hung Sing Association in Guangdong had been teaching Choy Li Fut publicly for decades before Jingwu arrived.  Still, it is undeniable that public boxing schools in Southern China weren’t all that common in the 1870s.  Perhaps it is asking too much to expect to see them in San Francisco during the mid-19th century.

Nevertheless, it recently occurred to me that we might be missing an important part of this story if we restrict our vision only to what we currently consider to be the “martial arts.”  The most commonly practiced martial style in America or Europe in the 19th century was bare-knuckles boxing.  Eventually this evolved into the competitive sport that exists today.  As such it is interesting to discover that there were a number of Chinese fighters training in western style boxing in the late 19th and early 20th century.  Our current definition and understanding of the “martial arts” is in many ways a recent social construction.  I personally suspect that these Chinese fighters may not have been aware that they were not studying the “martial arts” when they took up boxing.

Boxing has always had an interesting relationship with the other martial arts, especially in America.  For much of the 20th century it was a huge industrial and entertainment venture that practically every adult in the country followed.  Boxing was also taught and promoted in the US military (often on an informal basis).  Many young service men in WWII were introduced to the “sweet science” and developed a taste for hand combat in the ring.  These same individuals took up Judo, Aikido, Karate and Taiji in droves after their return to America.  It was their interest and experience that fueled the first explosion of interest in the martial arts that occurred from roughly the early 1950s to the mid 1960s.  For many western students of eastern fighting styles, boxing was the “gateway drug” that introduced them to the martial arts.

So when and how was boxing dropped out of this original cultural context?  It seemed to sit on the same shelf with Judo quite comfortably in the 1940s, but not in the 1970s?  This question has not yet been answered, but it deserves some serious thought.  It may reveal quite a bit about how perceptions of the martial arts have changed and evolved in American popular culture.

What is clear is that western boxing was known and studied in China.  Informally Chinese, American and Japanese sailors traded “fighting techniques” when they encountered one another in places like “Blood Ally” in Shanghai.  Western boxers were a popular exhibition event in many cities in China after WWI.  Boxing was even promoted during the 1930s by the Nationalist government.  The Central Guoshu Institute provided classes on boxing and Kennedy and Guo (2005) discus a western boxing manual that was published in the mid-1930s (Chinese Martial Arts Training Manuals, Blue Snake).

As one would expect, western style boxing appears to have been even more popular among the Chinese-American population.  While they lived an often segregated existence, throughout the latter half of the 19th century there are occasional references to “Chinese Boxers” competing in exhibition matches in various local newspapers.  Asian fighters were a rarity and probably an easy way for promoters to draw a crowd and make money.  Not a lot is known about the earliest of these individuals and it remains a rich area for further investigation.

By the early 20th century some of the Chinese-American fighters were ready to turn pro.  One such individual was Sing Hosan, pictured above.  Sing Hosan was born in the closing years of the 19th century in a mining camp in Hailey Idaho.  He had a number of professional fights and his picture was in the newspaper a couple of times.  Unfortunately I have never been able to figure out what his ultimate professional record was or when he hung up his gloves.  His fight with the Irishman “Spike” Hennessey ended when the heavier and stronger Sing knocked his opponent out in the sixth round.

Boxing as a Substitute for the Martial Arts in Philadelphia

Still, as the accompanying news clipping makes clear, a mixed race fight was a pretty rare thing at that point in time and it is not clear whether such a career could have been sustainable.  More humorous, and in some ways enlightening, is a story from Philadelphia a quarter of a century earlier.

This fight was not multiracial but instead featured two Chinese amateur boxers who sought to settle a simmering feud.  Luckily a local fight promoter was on hand to figure out how to turn their personal misfortune into his own financial gain.

Loo Hing (sorry about the romanization, I am following the original newspaper account) was a local resident who worked in a Philadelphia laundry.  Hi Sing Foon moved to Philadelphia from San Francisco in 1883 and had a reputation as a trouble causer.  A dispute erupted between the two and Hi Sing Foon sought to settle it by branding Hing with a hot iron.

Hing contacted the police and had Foon arrested.  Unfortunately Foon was able to produce a number of witnesses who claimed that Hing had actually accidentally branded himself.  The judge ruled in Foon’s favor.

Not satisfied with this apparent miscarriage of justice Hing contacted a trainer by the name of Red Mooney at Clarke’s Boxing Gym in Philadelphia.  He offered to do Mooney’s laundry in exchange for boxing lessons.  Mooney accepted and the two started to train.  I have always found it very interesting that Hing went to a western boxing gym (a place that he was familiar with from his work) when he wanted to learn how to fight.  Unfortunately his trust in Mooney was misplaced.

Hing only had a couple of weeks to train before Mooney and friend named Dan Reilly decided to make some money out of the unfolding events.  Reilly tracked down Foon and warned him about Hing’s preparations for revenge.  He offered Foon boxing lessons, a cut of the take and a chance to deal with his rival in the ring.  Foon refused the lessons but wisely decided it was better to fight his rival sooner rather than later.

Hing and Foon squared off in what turned out to be a fairly brutal and undignified affair.  Foon clearly had the upper hand throughout the fight and may even have been trained in the Chinese martial arts.  Hing was an inexperienced boxer and his form broke after the first round.  Still, he proved to be game and went 12 rounds with his opponent.  Foon disregard the niceties of boxing all together.  He grappled and threw his opponent frequently and finally won the fight after kicking Hing in the head and then finishing him off with a tremendous “hammer fist strike” brought down directly onto the top or back of Hing’s head.

Hing must have been stunned, but he was apparently not “KO’ed” by the standards of the Philadelphia fight promoters.  After 12 rounds both battered fighters refused to go on with the match.  Hing failed to find justice in the boxing ring, and Foon collected his winnings and left.  A fuller account of the fight can be found here.

Professional and amateur Chinese-American boxers offer a rich wealth of experience that speaks to various aspects of the Asian American experience.  Currently most of their story remains untold.  Research on the topic will most likely have to be conducted at the local and community level.  It will probably involve reading a lot of old newspapers and doing detailed family histories.  Still, as the prior experience of martial arts historians who have delved into the Japanese-American experience has demonstrated, the rewards would likely justify the time and effort.

8 thoughts on “Through a Lens Darkly (5): Early Chinese-American Boxers.”