It will come as no surprise to regular readers that I am a fan of late 19th and early 20th century martial arts ephemera.  Postcards, being visual, cheap and easily mailed around the globe, were one vector by which popular images of a wide variety of physical and combative practices were spread.  As we have seen in previous posts, images of the Chinese martial arts were often captured and marketed by Western photographers seeking to editorialize on “Old China.”  In some cases they produced nostalgic photographs designed to mourn the passing of traditional life.  Other, less sympathetic images, functioned as a commentary on China’s supposed backwardness.  This was a common sentiment in both Chinese and Westerns discussions of the slow pace of modernization in the 1920s and 1930s and many commentaries on Chinese physical culture fell on one side of this debate or the other.

Still, I have yet to locate any picture postcards of the TCMA explicitly meant for domestic consumption within China.  Perhaps that is just selection bias, or a failure of the global market for stamps and other ephemera.  More likely it suggests that such self-orientalizing images were of less interest to Chinese middle class consumers during the Republic period than they were to Western audiences hoping to catch a glimpse of the “exotic East” in an era before television.  Yet no matter which side of the modernization debate the postcards in question seemed to support, these images were literally the product of the Western or colonial gaze. While postcards can be an important historical resource, their interpretation requires care.

This is one of the things that makes Japanese postcards so interesting.  The growing popularity of the Budo arts in Japan during the Meiji period meant that these images are much more plentiful and varied.  Obviously that is great for both the collector and the historian.

Yet Japanese photographers also seem to have been more likely to turn their lenses towards martial artists, and Japanese publishers commonly translated these images directly into postcards.  In some cases these were intended for sale to visiting tourists, or bulk export to Europe and North America.  In other cases the postcards were produced for domestic consumption.  Indeed, most of the cards showing Japanese styles which I have encountered were actually circulated within Japan.  There are even some great images of the Chinese martial arts that were produced for domestic consumption in Japan during the first half of the 20th century.  Images of the martial arts clearly had more appeal to pre-war Japanese consumers than their middle class Chinese counterparts. It is thus interesting to think about the wider variety of discourses that arise within this body of postcards, and the ways in which these messages were linked to specific economic markets and intended audiences.

Images of the Japanese martial arts often seem to accentuate a traditional and picturesque quality on postcards intended for foreign consumption.  They adopt the “timeless Orientalism” that is so loved by tourists in any era.  In contrast, cards produced for consumption within the Japanese marketplace often evoked the more modern and rationalized aspects of martial arts training in the 1920s.  Japanese audiences wanted to see well maintained University, high school or community dojos.  Other cards payed homage to specific local martial arts traditions or important events at an individual branch of the Butokukai. As we move into the 1930s an entire sub-genre of postcards emerge portraying the martial arts as a pleasant or normalizing aspect of military life.  Unsurprisingly, nationalist sentiments are seen to varying degrees on a number of these postcards.  But other images produced for domestic consumption were simply intended to be cute or ironic.  Images of child practitioners were particularly popular.

Perhaps that is the best place to begin our discussion of the postcard seen at the top of this essay.  All of the practitioners in this photograh appear to be children ranging from elementary school age to their late teens.  However, the composition of the shot leads one to suspect that we are seeing some sort of school or training group rather than a pure exercise in nostalgia.

A wide variety of martial skills are being demonstrated in front of an imposing western style building adorned with Japanese flags and colored banners.  Specifically, we see younger students pairing up with naginatas, bokken vs. naginata, bokken vs. staff, unarmed jujutsu, and an individual who is grappling while holding a training knife.   The photograph seems to have been composed to emphasize the sheer variety of practices within the traditional Japanese martial arts.

Its also critical to note what is missing from an image such as this.  By the 1910s the most popular martial arts among Japanese practitioners were kendo and judo.  They are also among the most commonly encountered arts on postcards from this period.  But both are conspicuous by their absence in this image.  Rather than the modernized competitive practices of the Meiji period, this photograph seems to be deliberately calling back to an older and more militant set of arts.  That suggests a number of questions about the setting and date of publication of this card. 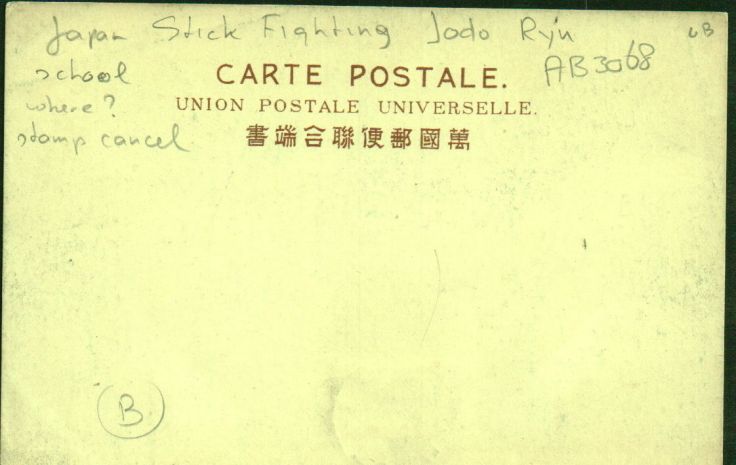 The back of the postcard is undivided.  This typically indicates a production date of between 1900 and 1907 for cards produced in Japan, and a date prior to 1907 for cards printed in the West.  That might seem to solve our problem except that the Japanese military also produced postcards with an undivided back in the 1930s and 1940s. They were also prolific promoters of nationalist themes and martial arts imagery.  So not every undivided back postcard will date to the early 20th century.

To solve this dilemma one typically needs to look for other clues.  In this case the font used on the back, and the type of card-stock employed, confirms that this card was produced sometime prior to 1907.  While the stamp has a Japanese postal cancelation mark (dated May 15th, 1906) the card was never sent.  This leads me to suspect that it may have been purchased by a Western tourist in Japan who brought it back to Europe, where I purchased it.  But as the card was never mailed we don’t know who the purchaser was.

Lastly, we must turn our attention to the inscription on the lower left hand corner of the card.  It has proved to be something of a riddle.  This post was titled a “research note” precisely because we are still working on a translation.  I have presented this inscription to a number of martial artists who work with material from this period (and even a professional translator) and we have yet to decipher all of the details of what is being said.  The essential problem is that whoever labeled the photograph had terrible handwriting, coupled with a love of anachronistic Chinese characters which do not appear in modern Japanese dictionaries. Incidentally, in martial arts circles these sorts of characters were often favored in highly nationalist texts.

The second line seems clear enough, and we have some guesses as to the rest.  But in a case like this a partial or incorrect translation can be worse than no translation at all, so we will hold our peace until the full story can be told.  If there are any Japanese language scholars out there who would like to take a crack at it, be my guest!

I think we can now answer the classic social scientific question “What is this a case of?”  The photograph on this postcard seems to have originally been produced for domestic consumption in Japan.  At some point a publisher decided that the conservative, even nationalist, image of these martial artists would also appeal to Western tourists who were looking for romantic images of “traditional Japan.”  The postcard was thus reprinted for global distribution. This specific copy was purchased by a tourist and taken back to Europe where it was probably preserved in a collection or photo-album.  Such a story suggests the essential truth of the argument that any inter-cultural translation is essentially a transformation, even when the text in question is a visual and emotional one.  Indeed, the journey of this postcard (and the changing nature of how its image was likely interpreted) foreshadows important trends in the global journey of the Japanese martial arts during the 20th century.

If you enjoyed this postcard you might also want to see: The Five Tiger Stick Society: Pilgrimage, Local Religion and the Martial Arts