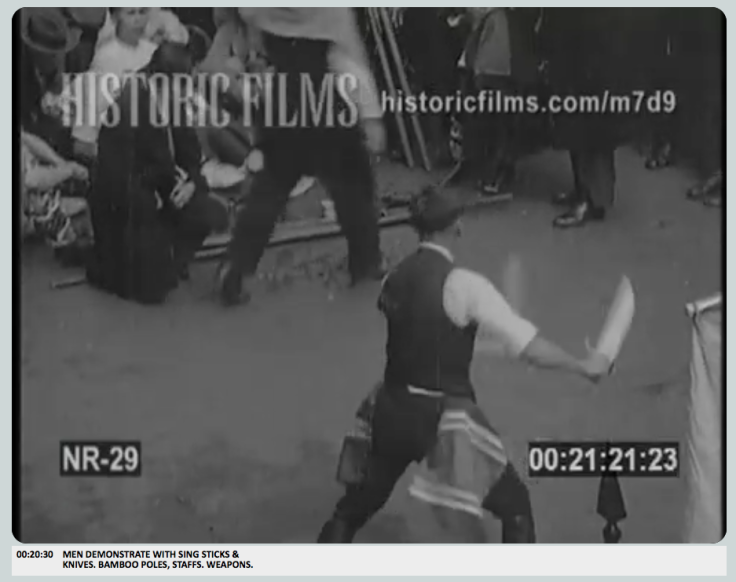 While I have a few connections in New York City’s TCMA community, it has always been my experience that one turns up different sorts of insights by getting out and exploring the terrain on one’s own.  It was with that notion in mind that my wife and I set out to reconnoiter the older Manhattan Chinatown, which now seems almost quaint when compared in scale to its larger and more vibrant neighbor in Queens. The weather was great, and we got some memorable photos of tourists from China stopping to take photos of Chinese-American businesses and families.  The gods of globalization move in mysterious ways.

The afternoon was not a total bust.  We briefly made contact with two people working on Xingyi in a local park, though it was abundantly clear that no manner of martial art was going to distract the local residents from the many card games that dominated the district.  After purchasing a book (by my friend Mark Wiley) from a local martial arts business, we were able to learn a little more about the neighborhood’s martial arts scene.  Things sounded quiet, but we found out about two other instructors (Taijiquan and Wing Chun) who occasionally taught in the same park.

Still, there was very little evidence of the vibrant martial arts scene that had been so prominent during the late 1970s and 1980s. While the gentrification that has reshaped so much of the island was less evident south of Canal Street, Chinatown evolves and changes, like everything else.  It seems that the warehouse schools which I read about in memoirs and doctoral dissertations have suffered the same fate as many of the more colorful elements of New York life.

In search of some historical perspective my wife and I next visited a local non-profit dedicated to preserving as much of Chinatown’s local and oral history as possible. The young employees (all in their 20s) thought that our subject sounded fascinating. Yet as they searched their databases and various key-word indexes they didn’t hold out much hope of finding anything useful. While they approached their job with infectious enthusiasm, they freely admitted that most of the neighborhood’s older residents didn’t share their zeal for preserving the past.

In fact, convincing older Chinese-Americans to sit down for oral history interviews was proving to be every bit as difficult as one might suspect.  While there was some interesting history available on various musical and opera societies, once the tape recorders were turned on no one seemed willing to admit to knowing anything about martial arts instruction or Lion Dancing. In fact, the young researchers who staffed the office were hopeful that as a “total outsider” I would have better luck than them when it came to interviewing individuals and ferreting out this chapter of the historical record.

The situation was even bleaker when looking for resources that might discuss martial arts training in the pre-war period.  Outside of a few stories and names, not much of substance seems to have survived. Giving me a mournful look, my ever-earnest historical guide explained that with so few surviving sources much of the texture of the community had been irrevocably lost. So ended my hopes of unearthing a rich trove of New York’s early Chinese martial arts history.

Or so I thought. Research is a funny thing.  All of our sources are oddly specific, and even the most comprehensive database catches only a fraction of what is already sitting in some archive or library. While conducting a search for Chinese newsreel footage of martial arts practice during the Guoshu decade (1928-1938), I stumbled across something much more valuable. I found perhaps the best preserved and oldest footage of North American Southern Kung Fu practice that I had yet seen.  Even better, it was shot on the same New York City streets that my wife and I had recently explored.

Anyone interested in viewing this film can do so by clicking this link. This priceless visual record has been preserved on a reel of out-takes and raw newsreel footage that is held by the Historic Film archive.  The entire reel is quite important as it helps to contextualize how images of the Chinese martial arts were classified and framed at the time of their production and cataloging.  All of the clips on the reel were produced during the 1920s and most of them focus on scenes of entertainment. The period’s jazz tradition is well represented, and scenes of Chinese-American life find themselves juxtaposed with visual records of the African-American community.  It should be noted that there are multiple recordings of Chinese New Year Festivals on the reel, suggesting a persistent interest in the subject.

At minute 19:42 viewers will encounter footage of a New Year celebration which happened on January 10th, 1929. In addition to the more common scenes of enthusiastic crowds, fireworks and Lion Dancing, two minutes of footage was also shot of the sorts of martial arts exhibitions that accompanied these festivals. While such exhibitions are occasionally noted in period newspaper reports, this is the most complete visual record of such a performance (in North America), that I have yet encountered.

This material rewards a close examination. None of this footage has been narrated, nor are there scene cards. As such I suspect that most of this material was probably treated as “out takes.” Still, it’s a rich source.  While we might lament that we only have two minutes of material, by the standards of a 1920s newsreel, two minutes is an eternity.

This footage is composed of a series of much briefer clips (most ranging in length from 10 to 30 seconds) which focus on the performance of individual martial artists, all performing on a single day in what appears to be the same crowded outdoor venue.  In total 11 sequences are shown, each focusing on some sort of forms performance. Both unarmed and weapons sets are represented in the sample, as well as a few two-person weapons sets. (For the sake of clarity this post is discussing only the martial arts demonstration, and not the excellent Lion Dance footage found on the same newsreel which probably deserves specialized treatment of its own).

If we assume that most of these sets could be introduced, set up and performed in about two minutes, it seems that the original demonstration was at least 22 minutes long. Even more remarkable is that very few individuals (maybe one or two) made any repeat performances in this show. Thus it took at least a dozen martial artists to stage this demonstration.

Most of the individuals in the show were wearing regalia suggesting that they had just come from (or were headed to) Lion Dancing.  The standard uniform appears to have been a white shirt, black bowtie and Kung Fu pants, but a number of individuals can also be seen to wear the typical street clothing of the period. All of the performers in this film are male (though I have seen newsreel footage of female martial artists in NYC in the 1930s).  Some are dressed as common laborers, while other have the air of shopkeepers or clerks.

A detailed breakdown of the film is as follows: 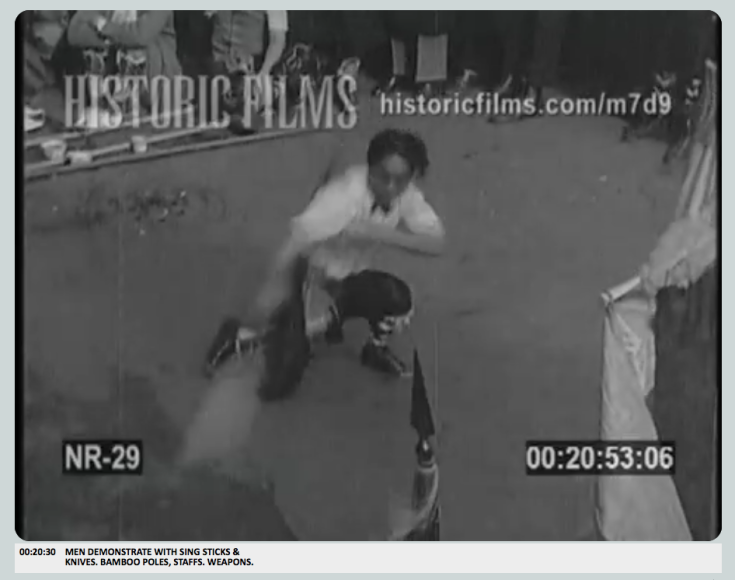 So what sort of demonstration are we looking at? To begin with, one of remarkable sophistication.  The conventional narratives suggest that modern Chinese martial arts schools, as we know them today, did not begin to appear in Chinatowns in cities like New York, San Francisco and Toronto until the 1950s.  Prior to that it is not the case that the martial arts were never taught. Rather, their instruction tended to be sponsored by the various fraternal societies, theater groups and criminal organizations that dominated much of these neighborhoods’ associational life. Indeed, as Charlie Russo has demonstrated in his book on the Bay Area martial arts community, the first generation of public instructors often opened their school after having first established a reputation in community these group. For their part, the various Tongs are generally thought to have been more interested in training “street soldiers” capable of collecting gambling debts, acting as bouncers in a variety of establishments and dealing with belligerent tourists.

Still, the existence of this film problematizes any attempt to bifurcate early 20th century Chinese-American martial arts into a “practical” pre-war phase and a post-war era that might be more recognizable.  While it seems unlikely that any of the individuals received their instruction in public commercial martial arts schools in New York City during the 1920s (to the best of our knowledge there simply weren’t any), it is now clear that there were a large number of individuals who were regularly gathering to train in the traditional martial arts.  Further, staging a Lion Dance and demonstration with as many individuals as we see on this film suggests a fair degree of organizational sophistication.  While they may not have been organized as a public school, it would appear that their institutional Kung Fu must have been pretty good.

What about their physical practice?  All of this film was shot from a single elevated camera angle, so the various martial artists move in and out of the frame.  This combined with the repetitive nature of many Southern sets, and the short duration of most of the clips, makes it very difficult to positively identify the various forms being displayed. After sharing this film with Hung Gar instructors on various continents, and a couple of Choy Li Fut students, we were not able to identify any of the sets with 100% certainty.  Most of the unarmed and weapons work bears a resemblance to pre-Wong Fei Hung style Hung Gar. Alternatively, the one set in which we see the rattan shield and sword combined with tumbling is highly suggestive of some sets that are still practiced in Choy Li Fut.

Identifying these sets has proved to be somewhat frustrating. The film suggests that the general movement culture (or possibly “habitus”) of the Southern Chinese folk arts have remained remarkably consistent over the last century. It was genuinely interesting to see how the seventh performer moved with the hudiedao. Figuring out just what these guys were doing might be an important clue in reconstructing the early TCMA community as it existed in New York city during the 1920s. If anyone has any insights into the identities of these sets (or better yet, the martial artists) please leave a comment below.

If you enjoyed this essay you might also want to read: Lion Dancing, Youth Violence and the Need for Theory in Chinese Martial Studies