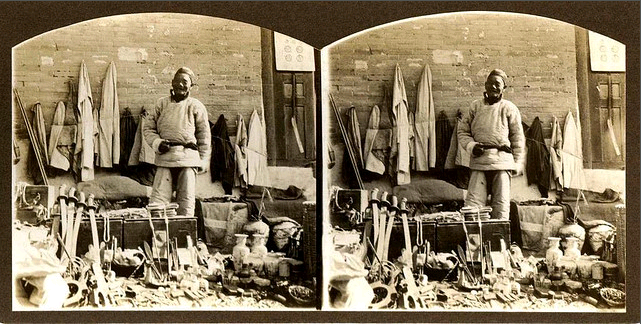 ***Recently I was having a discussion about the state of Kung Fu in China with a friend.  (You can see his detailed post on the topic here).  He was lamenting the general decline of interest in the arts and their simultaneous “commercialization.”  After thinking about his comments for a few hours it struck me as something that should be addressed.  Certainly some forms of commercial exploitation can be bad for the TCMA.  I think that we have all seen examples of this at one time or another.

Yet we tend to forget that the martial arts, as we know and experience them now, were born out of trade and commercial markets.  In fact, if one were looking for a tool to promote the arts so that they could be spread to the greatest number of people, markets would be a great place to start.  The disdain for markets and “selling one’s skills” that we often encounter in the TCMA seems to be a remnant of Confucian thought.  Certainly these sorts of sentiments have been popular in some (often privileged) circles.  But to what degree did they reflect the actual lived experience of Chinese martial artists?  In today’s post we will be headed back to archives to briefly explore a little of what we know about the martial arts in China’s 19th century marketplaces.  If this is a topic that interests you be sure to see the link provided at the end of this essay.***

It is clear that the traditional Chinese martial arts, as practiced in the Qing dynasty, were many things to many people.  Still, for most of their practitioners they were first and foremost an economic resources.  Soldiers, caravan guards, and watchmen all depended upon the martial arts to make a living.  So too did opera performers, rural bandits and urban gangsters.

Pharmacists and doctors often practiced martial arts to demonstrate their mastery of the unseen forces of the universe.  A respectable clinic might rent space to a martial arts school and prescribe martial arts training to sickly patients.  Less reputable medical figures, such as traveling patent-medicine men, would journey from place to place displaying their martial skill to draw a crowd before plying them with their wares.

Of course other individuals also found themselves on this same economic circuit.  These might included professional challenge-match fighters, wandering martial arts teachers, and even popular Daoist priests who would sell charms to the populace that were empowered by their martial performance.

As diverse as this list of people is, there are a few things that unite them (other than their reliance on the martial arts.)  All of these individuals depended on economic markets to make a living.  Some of these markets were permanent, others opened only seasonally or on certain days.  Only the most prosperous merchants and professionals could afford a large permanent storefront in the heart of a busy market.  Most other vendors set up stalls or traveled from town to town as the different market days opened and closed.

Opera singers, story tellers, musicians and puppeteers all flocked to populated areas where it was possible to draw a crowd and sell their skills.  Pawn shops dominated the area as they were one of the only sources of liquidity in the local economy.  They also tended to attract resentment.  As a result they were usually housed in multistory tower-like buildings that loomed over the single-level landscape.  Such facilities were major employers of guards and watchmen.  While a steady paycheck, this was considered a fairly low prestige occupation, even for a martial artist.

Traveling merchants with valuable goods would frequently retain the services of armed escort companies.  Likewise visiting challenge fighters would raise a stage and try their best to attract a paying crowd on market days.  All sorts of traveling martial artists and performers congregated in these marketplaces.  In some places (such as Foshan at the end of the 19th and the start of the 20th century) this density of expertise even led to the growth of a competitive market in martial instruction.

Selling Swords: What would a martial artist need to buy in a market?

I have discussed some of these individuals elsewhere, so today I would like to turn my attention to the commercial institutions of the marketplace itself.  What sorts of merchants met the needs of working martial artists?  By answering that question we will create a more complete picture of the martial world as it actually existed in southern China during the 19th century.

In an upcoming post I hope to discuss the world of elite sword collecting by wealthy individuals and scholars during the Qing dynasty.  This is a fascinating topic.  As near as I can reconstruct most of these individuals seem to have acquired their weapons through specialty brokers and treated them as “objects of arts.”

Needless to say, things were very different for the average working martial artist or guard in the local marketplace.  If one worked for an armed escort company or other type of large firm it was the employers responsibility to provide weapons (including expensive rifles and handguns).  Wandering performers and free-lancers were on their own.  They generally had to either commission a smith to make a weapon (probably a rare event) or else buy them from a local pawn shop or junk dealer.

Our first photo of the day is a wonderful set of stereoscopic images showing a market place junk dealer displaying his wares.  Prominently placed in the foreground are four long ox-tailed daos.  This is interesting as these swords were never issued to the military, but they were highly favored by civilian martial artists of the period.  None of the blades appear to have scabbards.  The quantity of nearly identical swords is also interesting.  Many traveling sales acts or martial displays including more than one performer and they often displayed bundles of weapons.

Weapons are interesting as they tend to photograph well.  But these were not the only goods that lower class martial artists were interested in.  There was also a steady trade in small, cheaply printed, martial arts manuals or guidebooks during the 19th century.  Currently the received wisdom is that printed martial arts manuals were mostly a product of the Republic of China period.

This may certainly have been true in some parts of the country.  Nevertheless, China is a very regional place and that makes generalization difficult.  It now appears that the dense commercial networks and high concentration of martial artists in the Pearl River Delta region may have led to the early emergence of a commercial markets for hand combat resources and instruction substantially before this appeared in other areas of the state.

In my previous post, I documented an account and partial translation of a martial arts manual from the 1870s, aptly titled “The Nobel Art of Self-Defense.”  Readers will recall that this small book (really a pamphlet) was about a dozen pages long, and it contained wood block prints and brief descriptions of a number of postures from boxing, pole fighting and fencing.  The translator of that manual described in some detail how it was possible to buy many such printed manuals in the market place, and that better books on the martial arts were available if one went to a specialty book dealer.

The following report from the Asiatic Journal and Monthly Register (dated June 1830) provides us with a much earlier account and discussion of another such early training manual (again illustrated with roughly executed wood cuts).

“Pugilism in China.—The art of self-defense is regularly taught in China.  It is much practiced, although not countenanced by the local governments.  In the penal code, nothing appears concerning it.  Tracts are printed which would, in all probability, accompanied by their wood-cuts, amuse the fancy in England.  The Chinese have no pitch battles that we ever heard of; but we have seen a pamphlet on the subject of boxing, cudgeling, and sword-exercise, in which there are many fanciful terms.

The first lesson, for a Chinese boxer, consists of winding his long tail tight around this head, stripping himself to the buff, then placing his right foot foremost, and with all his might giving a heavy thrust with his right fist against a bag suspended for the purpose.  He is directed to change hands and feet alternately, restraining his breath and boxing the bag of sand right and left, for hours.  This exercise the fancy call “thumping down walls and overturning parapets.”

In the second lesson, the pugilist grasps in each hand a “stone lock,” i.e., a heavy mass of stone worked into the form of a Chinese lock.  Then, being stripped and tail arranged as before, he practices thrusting out at a man’s length these weights, right and left, till he is tired.  Hi is to change feet and hands at the same time.  This lesson is called “a golden dragon thrusting out his claws.”  Next comes “a crow stretching his wings—a dragon issuing forth from his den—a drunken Chinaman knocking at your door—a sphinx spreading her wings—a hungry tiger seizing a lamb—a hawk clawing a sparrow—a crane and a muscle reciprocally embraced,” with various other specimens or fanciful nomenclature for divers feats of the pugilistic art. –Canton Reg., June 18.”

It is interesting to note that the basic outlines of this particular boxing manual seem to be similar to the one discussed last time.  Again, boxing, pole fighting and fencing are all covered. Still,  There are some important differences as well.  It is clear that this pamphlet devotes much more time to basic strength training and conditioning.  I found the account of early bag-work very interesting, and it seems that the colorfully named “lessons” at the end of this work are probably identical to the similarly named two man illustrations found in section four of the Bubishi (See Patrick McCarthy’s 2008 translation).

In fact, the pamphlet described above dates to roughly the same era as the Bubishi, the longest and most detailed 19th century Southern Chinese martial arts manual that has yet been published.  These accounts, from 1830 and the 1870s, collectively demonstrate the importance of cheaply printed pamphlets and manuals to the late Qing martial marketplace.  They appear to have been mass produced and widely available, yet were illustrated and written in such a way to be accessible to individuals with limited literacy.

This discovery provides a new context in which to view the longer, often more complicated, hand-copied martial manuscripts tradition that existed simultaneously during the late Qing.  While these books have previously received all of the scholarly attention, it does not appear that they were the most common sort of literature a hand combat student might encounter.  It is interested to speculate as to whether cheaper editions of these more elaborate books were ever printed.  Given that L.C.P. states that they could be bought from local book sellers, that seems like a possibility.  Still, that is a research question for another day.  We may now conclude that inexpensive books, pamphlets and manuals played a more important role in the development of southern China’s martial culture than most scholars have previously realized.

4 thoughts on “Through a Lens Darkly (7): Selling Swords and Printed Martial Arts Training Manuals in a 19th century Guangzhou Market.”