Yeah, I have been bitten by the bug.  It seems that archery, in all its many forms, is a hot commodity.  Between the “Hunger Games” and “Brave” it has gotten a huge amount of free publicity.  Young women are entering the sport in record numbers.  How many?  I heard an interesting fact during the recent Olympics coverage.  NBC said that on their web-page it was the most commonly requested and watched sport.  Its a shame they didn’t take the hint and aired so little of it.  I was talking to another friend recently who is a traditional wood carver.  I am trying to get him to hand carve me some long poles for my own Wing Chun practice but right now the only thing he is doing are Osage Orange bows.  He literally can’t keep them in stock.  Four or five years ago they weren’t big sellers.

The Chinese martial arts are no exception to this trend.  An awareness of the importance of archery to the traditional martial arts has been slowly growing for a number of years now.  Hopefully this means it will have a chance to put down roots rather than fade away as fads tend to do.

So just how important is traditional archery to understanding Chinese martial culture as it evolved during the Ming and Qing dynasties (the era most interesting to modern martial artists)?  It is critical.  This was the single most important skill in a martial artists repertoire.  If you had excellent archery skills you could take the state military exam and have a career as a military officer.  Archery was what separated skilled and cultured military men from thugs, night-watchmen and amateurs.  The military exams never tested your ability with a spear, or most other weapons.  These were details you could learn once you were in the service.  But the foundation of that learning had to be your own skills on horseback and with a bow.

Individuals trying to learn about traditional Chinese archery are in a very different position from most other martial artists.  Hand combat has traditionally been taught by local teachers and there are few ancient historical texts to guide students or even show these skills evolved.  As has been stated so many times before, boxing just wasn’t all that popular or a socially critical a skill.  Not much was written about the topic.  So today we have lots of teachers and few texts.

With traditional archery we have an embarrassment of ancient texts, but very few skilled instructors.  Since archery was a valued career and social skill, critical to your success at court as well as on the battlefield, lots of people wrote books about it.  Even more surprisingly, lots of these books and written resources survive to this day and have been fully or partially translated into English.  In fact, just trying to conduct a survey of this material can be daunting.  I know, I am trying to do that now.

Like so much else within the realm of Chinese military culture, it probably better to think of China’s traditional archery practices as being a “plural” rather than a “singular” phenomenon.  There is no single art that can definitively be called “traditional Chinese Archery.”  Stead we have dozens of different schools, over a surprisingly long period of time, some of which are quite different in their goals and approach to archery.  They exist now only as texts.  Some of these texts focus on static archery, while others discuss shooting from horseback.  Some look at recurve bows and other focus on the crossbow (critical to the Chinese infantry).  It is really up to the student to decide what he or she wants to specialize in, but this means that you need to be clear about the choices you are making and the material you are seeing as you begin your study.  Some initial thought and study may be necessary before you rush out there to order your first bow.

One of the most pressing questions I see emerging from all of this is how art of traditional Chinese archery will spread in the west.  There are essentially two possibilities.  First, some group of traditional archers from China, with some sort of “connection” to a historic school, might emerge and manage to get ahead of this.  This could happen with or without government support.  Remember, archery is an important state-sponsored and Olympic sport in China, and the government has certainly noticed the up-tick of interest in “folk archery” (as they call it).  The Chinese government has shown an interest in using the traditional martial arts as a form of public diplomacy in the past.

The second possibility is that individual students and schools in the west don’t spend a lot of time searching for a teacher.  Instead start to read and study the existing body of texts and attempt to rationally recreate what they discuss.  I know how difficult it is to learn Kung Fu from a book, and I suspect that its not much easier to learn archery that way.  I personally would rather work with a teacher who came from a long line of experienced teachers.  But then again, this is exactly how the historical European martial arts were revived, and while it has taken a decade or two to smooth out the bumps, things are going quite nicely.

From the academic perspective of “Chinese martial studies” this is a very interesting question.  We are right on the cusp of seeing a new set of martial arts being “revived” (really born).  How is it going to happen.  If this process is different from the spread of boxing to the west, why?  Is it the existence of a robust library of truly ancient texts?  Or is it a matter of cheaper communications technology, trade and globalization?  Whether or not one is actually interested in letting any arrows fly, this a developing area that everyone in the field of Chinese martial studies will want to keep an eye on.

Source for bows and equipment:

Mariner Bows.  Great resource for a variety of bows at different price-points and draw weights.

Seven Star Trading Company. Better known for their work with antique Chinese swords and practical cutting, they also have a line of archery products.

Stephen Selby. Chinese Archery.  University of Hong Kong Press. 2000.  This book is the “bible” of traditional Chinese archery.  It is required reading for anyone interested in the art or Chinese martial studies more generally.

A recent article in Archery magazine looking at a traditional Chinese archery school in the UK and  the USA.

I also noticed that Empty Mind Films is shooting a documentary on Japanese archery.  Interestingly they have been shooting lots of background stuff in China.  Hopefully some of this will make it into the final product.

Chinese Folk Archery Federation For All.

Hand Made in China: TV Documentary on the making and use of traditional Chinese bows.

Associations or Schools that Teach or Offer Workshops in Traditional Chinese Archery:

Society of Chinese Warriors International.  A European groups dedicated to preserving the practices and culture of the Chinese Military Examination system.  Obviously traditional archery is a special point of interest for them.

Pa Kua Archery. A school in the UK that has added traditional Chinese archery to their lineup.  They also teach classes at their location in California.

If anyone is aware of important resources I have missed or schools teaching traditional Chinese archery, let me know and I will update this list. 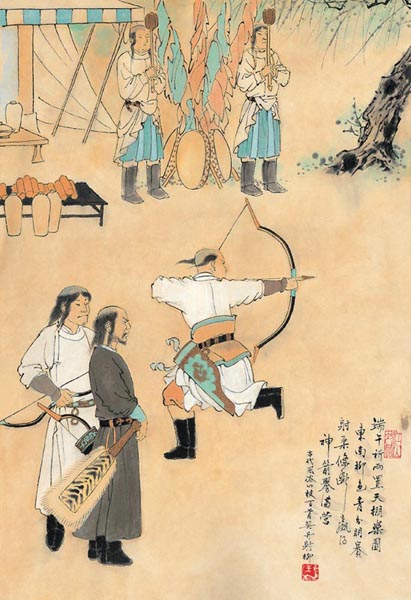