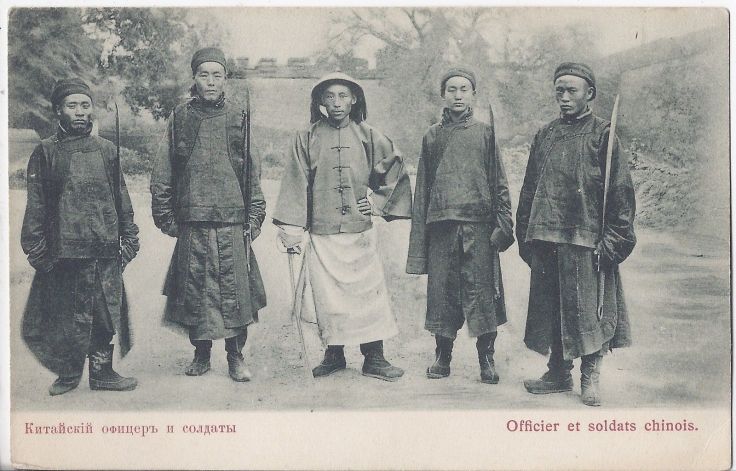 Welcome to week six of “History of East Asian Martial Arts.”  This series follows the readings being used in Prof. TJ Hinrichs’ undergraduate course of the same name at Cornell University.  This is a great opportunity for readers looking to upgrade their understanding of Martial Arts Studies.  It is also important for those of us in the academy who are thinking about how we can craft classes, or create new units, that draw on Martial Arts Studies in our own teaching.  Rather than reporting on the class discussion and lecture, this post will introduce the readings and some of the study questions that have been assigned.

The readings for this week swing away from the Tokugawa period and will focus instead on roughly contemporaneous events in China starting with the Ming/Qing cataclysm of the mid-17th century and continuing on to the unrest that marked the ultimate fall of the Manchu dynasty during the early 20th.  While the readings themselves focused on martial practice, a certain familiarity with the momentum political changes that defined this period is also necessary.

Despite a tendency among some martial artists to romanticize the Ming, the final years of their rule were not a peaceful or well ordered time. This was a period marked by famine, rebellion and banditry on an almost unimaginable scale.  It is no surprise that the late Ming would be a critical era in the development of the Chinese martial arts.  Further, the eventual victory of the foreign Manchu dynasty would lead many members of the gentry to re-evaluate the role of martial values as they sought to understand what had gone wrong with the previous government.

After a relatively quiet (and prosperous) 18th century, the martial arts burst back into the popular consciousness during the 19th. Again, this was not a coincidence.  Flood, famine, banditry and rebellion put pressure on China’s rapidly growing population and highlighted the Qing’s inability to respond to their needs.  Of particular note are the era’s large scale revolts including the Taiping Rebellion (the deadliest civil war in human history), the Red Turban Revolt, the Small Sword Uprising, the Nien Rebellion, the Eight Trigrams Revolt and the Boxer Uprising.  At the same time the imperial army was suffering one defeat after another at the hands of foreign forces.  The gentry, suddenly tasked with developing new types of militia units to defend local villages and transportation networks, began to take renewed interest in martial values.  While prior developments during the Song and Ming dynasty were interesting, this is really when we see the emergence of the modern Chinese martial arts.

Lets get on to the readings, there is a lot of ground to cover!

Notes on the Readings

Once again, the readings have been split between primary and secondary sources.  Douglas Wile has done a lot of the heavy lifting providing the class with translations of both the “Epitaph of Wang Zhengnan” and the “Taiji Classics.”  The goal of these writings is to introduce students to the “internal school” of Chinese boxing as it existed in the 17th century and later in the 19th.  There are any number of places where these works can be encountered.  The Epitaph must be the single most frequently translated and discussed  document in the history of the Chinese martial arts.  Likewise the Taiji Classics have been frequently reprinted.

Still, there are reasons to stick with Wile’s translation.  The opening chapter of his volume (The Lost Tai Chi Classics) has an important historical discussion which situates the Wu’s, the Li’s, the Yang’s and other important players in the emergence of Taijiquan within a modern political context.  This is critical as it reminds us that while the primary sources reviewed in this week’s readings have a sort of timeless, almost detached, quality to them, they were fundamentally responses to acute social dislocation.  We did notice that some of the undergrads who were not familiar with the Wade-Giles system had a bit of trouble with these texts, so when in doubt just remember:

If you want to delve a little deeper into Wang Zhengnan’s career (or at least how it was remembered in the early Qing), you might also want to check out this document at the Brennan Translation Blog.

The major secondary reading for the unit was Chapter Six of Meir Shahar’s volume, The Shaolin Monastery.  This is actually a fairly lengthy reading which includes multiple extensive excerpts of other period documents.  After reviewing the history and development of ancient Daoist Daoyin (medical gymnastic) practices, Shahar argues that modern Chinese hand combat systems emerge through the combination of more utilitarian Ming boxing systems with both religious syncretism and period medical practices in the early Qing.  In his view Qi cultivation and the quest for immortality were not so much secondary pursuits within the Chinese martial arts as they were fundamental characteristics of post-17th century fighting systems.

Of course Shahar’s entire volume is mandatory reading for anyone with even a passing interest in Chinese martial arts history.  Chapter 5 (“Hand Combat”) provides more context on the rise of unarmed fighting styles in the late imperial period.  Chapter 7 (“Suspected Rebels”) may be of interest to some readers as it contrasts the decidedly cool relationship of martial arts institutions (such as Shaolin) with the Qing compared to their more enthusiastic embrace by the Ming.

Most of the class discussion focused on question #2, examining how the construction of the Internal/External dichotomy in the 17th century (embodied within the Zhang Sanfeng/Bodhidharma or Wudang/Shaolin dyads) may have functioned as a political and social arguments which was later resurrected in the second half of the 19th century as China once again faced occupation by foreign powers.  That basic line of this argument will probably not come as a surprise to most readers of Kung Fu Tea, and it has been explored by various authors including both those on our syllabus as well as Stanley Henning and Peter Lorge.

I actually found myself slightly more interested in the comparative development of Chinese and Japanese martial arts during the early modern period.  It is probably not a coincidence that both the Japanese and Chinese fighting systems began to assume their modern, recognizable, form at approximately similar points in time.  Yet its also interesting that they diverged and went in such different directions.

It may simply be the case that warfare has always been different in Japan than China.  As the Japanese are forever fond of reminding us, they are a “small island nation” and China is a continental sized power.  Still, when one considers the nature of the Sengoku period and the dissolution of the Ming, I suspects that these two eras had more chaos in common than either side might want to admit.  Spears and guns became the dominant weapons (rather than bows or swords) as ever larger infantries (often made up of part-time recruits) were pushed onto the battlefield.  This trend was seen in both countries.  Indeed, Japanese warriors actually traveled to China during the late Ming with the express purpose of learning continental pole and spear fighting techniques.  Other, more direct, moments of martial exchange happened during the campaign against the “Japanese pirates.”  And even after the closing of Japan’s borders (as well as the Qing’s) neo-Confucian texts on everything from governance to medicine continued to circulate in Japan and formed the basis of much of their system of higher learning.

So why did the Japanese and Chinese martial arts head in such different directions during the 17th century?  Its not because the Japanese were unaware of Chinese theories of Qi, metaphysics or medicine.  Nor did these martial systems develop in pristine isolation from one another.  Both were capable of borrowing from the other when it was seen to be in their best interests to do so (consider the urgency with which late Ming-authors approached Japanese inspired saber techniques).

This is obviously a complex topic that requires a fair amount of thought.  But perhaps we can start by outlining a few reasons why elite Japanese martial artists in the new Samurai class might be less enamored by dreams of Daoist immortality than their Chinese counterparts.  It would be easy to note that these groups had vastly different value structures. Japanese warriors were embedded in a world defined by Buddhism’s almost aesthetic appreciation for impermanence. Meanwhile, the Chinese Literati were fully committed to an ideology of longevity that underpinned the legitimacy of both the state and the family.  Still, such an answer seems to ignore the “why” of it all?  After all, values are not themselves primeval and immortal. Rather, they were born out of specific historical and cultural processes.

In that respect its interesting to note the close correspondence between the internal school, as it developed in China, and the Daoist quest for health and longevity.  It is clear that the Manchu conquest of the Ming struck China’s social elite like a hammer.  As their world collapsed they were left to wonder why it had all gone so wrong.  One might hypothesize that this would lead to a crisis of cultural confidence.  Yet rather than abandoning their essential values some Literati responded through a fundamentalist reformulation of what it meant to be Chinese.

Buddhism, which had always been somewhat suspect due to its foreign origins and propensity for taking lands off the tax-roles, became an easy target.  Certainly some martial artists had been interested in medical questions during the Ming, but Shahar argues that it was political and social factors that contributed to the explosion of these viewpoints in the later 17th century.  Likewise, Douglas Wile anchors the explosion of modern Taijiquan in the late 19th century crisis of faith as China was once again forced to dig deep to find those values that would help it to throw off one group of foreign rulers (the Manchus) while avoiding the snares of another (the West).

In Wile’s view it was this cultural crisis of confidence that forced Chinese martial artists to articulate the value of persistence, flexibility and spiritual-regeneration when they could not win by force alone.  Ultimately it was China’s “yin” (cultural) that would overcome the West’s “yang” (modern military technology).

The situation in Japan was very different.  As in China, the peace of the Tokugawa was purchased with much bloodshed.  Yet it is significant that Japan was never subject to outside conquest during its formative years.  The values that carried the day were those of a victorious warrior class, not the stoic Ming loyalist.  Japanese martial tradition is certainly aware of the concept of qi/ki and has its own ways of harnessing it.  Yet the Japanese approach to self-cultivation would ultimately evolve along different lines.  If Chinese martial artists turned inward because of their repeated clashes with the outside world, the freezing of the class structure and the closing of the nation’s borders had a similar effect on the fighting systems of the Samurai.  Yet China’s Literati martial artists and Japan’s newly bureaucratized Samurai, while sharing many aspects of Confucian learning, were left to digest very different lessons during the centuries to follow.

If you enjoyed this class discussion you might also want to read: Martial Arts Studies: Answering the “So what?” question