Welcome to “Chinese Martial Arts in the News!”  Lots has been happening in the Chinese martial arts community, so its time to see what people have been saying.

For new readers, this is a semi-regular feature here at Kung Fu Tea in which we review media stories that mention or affect the traditional fighting arts.  In addition to discussing important events, this column also considers how the Asian hand combat systems are portrayed in the mainstream media.

While we try to summarize the major stories over the last month, there is always a chance that we may have missed something.  If you are aware of an important news event relating to the TCMA, drop a link in the comments section below.  If you know of a developing story that should be covered in the future feel free to send me an email.

Its been way too long since our last update so let’s get to the news!

News From All Over

There has been lots of news on the Kung Fu Diplomacy front.  As regular readers of this blog know I have an interest in Nepalese weapons and history, and am constantly on the lookout for stories about those subjects. I don’t always share them here, but this story brought two of my interests together!  A group of Chinese martial artists from Nanjing recently traveled to Nepal to stage a demonstration for a large group of children.  Wushu has been growing in popularity in the region for years and it seems to be part of China’s strategy for increasing its social capital in the region.  This event was no exception.  Note, for instance, these quotes from the story:

Addressing the function, Chinese Ambassador to Nepal Yu Hong said that such events hold a great significance to enhance people-to-people relations between Nepal and China.

“Wushu is an integral component of China and I believe this show will help Nepali children understand more about Chinese art and culture. This show is an important part of cultural exchanges,” Yu said.

On the occasion, President of Nepal Olympic Committee Jivan Ram Shrestha said that Chinese martial art is very popular in Nepal, and the show can bring the children of the two countries together. He also took the occasion to appreciate China’s assistance in development of Nepal’s sports sector.

Meanwhile a slightly more formal version of Kung Fu Diplomacy was on display in Qatar.  A group of “Shaolin Monks” were sent to the National Theater in the capital to stage an official event commemorating the 30th anniversary of the establishment of diplomatic relations between these two countries.  This was arranged by the Chinese embassy suggesting yet another point of contact between the martial arts sector and the official diplomatic community.

Of course the global flow of martial artists doesn’t only trend in one direction.  Yet another article in Xinhuanet notes that lots of foreign martial arts pilgrims head to the Shaolin Temple every summer.  In fact, the article seems to imply that it is mostly the intrusion of foreigners that spoils the “peaceful,” zen-like serenity of the temple.  Not that this matters to the Temple’s Abbot who sees all of this as a sign that his efforts to establish Shaolin as a global “lifestyle brand” are paying off.  I would take this article with a grain of salt, but it has some great quotes:

On Saturday evening, more than 120 Kung Fu fans from 20 countries and regions gathered in the sacred meditation hall and put on a diverse selection of performances to celebrate their Shaolin roots in the presence of the abbot Shi Yongxin….

The most mesmerizing segments of the evening gala included a group of grey-robed Africans singing and dancing to the beats of the djembe, American students’ stunning display of acrobatics, athleticism, and agility, and a musical about seeking the truth of Shaolin culture in the birthplace of Kung Fu put on by a group of Russians. The zealous audience went wild with most rising to their feet and in thundering applause.

This celebratory event is a microcosm of what Shaolin Temple is hoping to achieve on the global stage in the future and a part of its attempt to broaden its appeal to foreign audiences.

Those looking for a more visual discussion of the gathering will probably want to check out this photo-essay in ECNS.  This is only a small selection of the sorts of stories that have been circulating in recent weeks.  Summer, it would seem, is cultural diplomacy season. 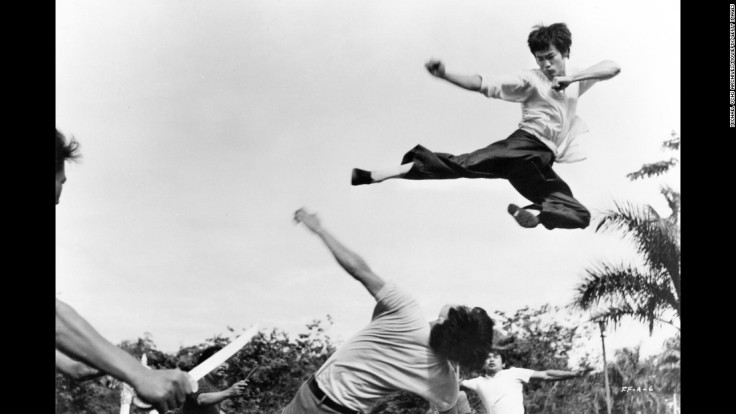 Bruce Lee continued to dominate the headlines for a second month, thanks in no small part to Matthew Polly’s recent biography.  Be sure to read our interview with Polly if you have not already seen it. The most impactful of the recent pieces was one that ran on CNN titled “New Bruce Lee bio debunks myths about the ‘kung fu Jesus’“.  Despite the title, that piece seems to be relatively balanced compared to much of the recent press coverage.  A lot of the tabloids are just latching on to the most sensational (and truthfully, the least consequential) aspects of Polly’s book.

Indeed, this book seems to have functioned as something of a shared global-spectacle, reigniting the public conversation about Lee.  That, in turn, has led to some interesting think pieces.  This one, titled “Bruce Lee, my Father and Me” would be particularly important for anyone interested in the intersection of politics, martial arts and global popular culture in the post-9/11 era.

Unsurprisingly the South China Morning Post has run a number of follow-up stories capturing different facets of the Bruce Lee phenomenon.  One of my favorites was a piece on Jackie Chan and a number of other actors who tried to emulate (or in some cases just clone) Bruce Lee’s performances after his death.  Other articles focused on Lee’s Hollywood connections to individuals like Steve McQueen and (very tangentially) to the Manson murders.  And then there was this podcast which asked how Bruce Lee used kung fu to fight bigotry.

Again, this is just a small sampling of the many stories on Lee that are circulating right now.  In fact, the martial arts studies community just wrapped an entire conference dedicated to Lee and his legacy.  Hopefully we will have a full report on that in the next week or so.  It seems safe to assume that we will continue to discuss Lee’s legacy for decades to come. 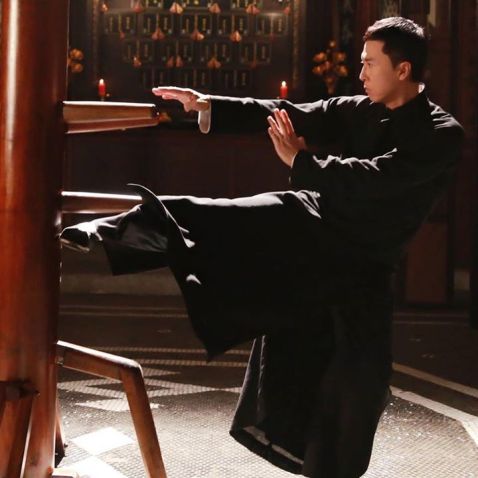 We have some great news for fans of the Ip Man film franchise.  GQ notes that the first three films (all featuring Donnie Yen) are now up on Netflix.  They also published a short review praising the series, though oddly they seem to have liked Ip Man 2 better than the original.  I guess there is no accounting for taste.

If your taste in Kung Fu films runs in a more vintage direction, and you were anywhere near NYC, I am sure that you have been spending some quality time at the MOMA lately.  They have been celebrating the late martial artist, choreographer and film director Lau Kar-leung with a ten film retrospective titled The Grandmaster (5-17 July).  This would have been a blast, I wish I could have been there.

Speaking of the Ip Man franchise, it looks like they wrapped filming all of the China based sequences for number four back in June.  The big surprise in recent days was the announcement that the story will feature a showdown between Donnie Yen and Jackie Chan.  Which could be great!  However the circumstances of the fight sound…interesting.  Lets just say Ip Man may be helping to bail a young Bruce Lee out of trouble…on this side of the Pacific.  Honestly, I would love to see what the meetings are like where they come up with stuff.  Of all the stories you could have told about Bruce Lee’s relationship with Ip Man….

Taijiquan, as always, has been in the news.  Most of these articles continue to focus on the arts growing popularity in the West as a result of its therapeutic powers.  I thought that the most interesting of the recent batch was this piece, profiling the students in local class.  The upshot is that they are all cancer survivors and their group is sponsored by the Cotton O’Neil Cancer Center.  Its not a long piece, but the interviews are good and start to get at the unique personal experiences of these students.  This seems like a great research opportunity for anyone with a background in medical anthropology and an interest in the martial arts.

Last but not least, I made the local newspaper!  Or it would be more accurate to say that my lightsaber combat group did.  And the blog even got a shout-out as well. A reporter from the Ithaca Times visited one of my classes and spent about an hour interviewing me afterwards, trying to wrap his head around what we were doing.  He wasn’t a martial artist, but all in all I think that he did a good job in capturing what this project is all about.  So yeah, if you are ever in Central NY come on down and check out the “ancient” art of lightsaber defense!

A lot has happened on the Kung Fu Tea Facebook group over the last month.  We saw a fantastic historic image of a Chinese weapons workshop, watched some newsreel footage with  “Big Sword” troops from the 1930s, and found out what Ninjas actually ate for dinner! Joining the Facebook group is also a great way of keeping up with everything that is happening here at Kung Fu Tea.

If its been a while since your last visit, head on over and see what you have been missing!

One thought on “Chinese Martial Arts in the News: July 16 2018: Ip Man, Bruce Lee and the Shaolin Temple”