Through a Lens Darkly (45): Creative Collages and Dueling Mythologies of the Chinese Martial Arts

Vintage postcards or other ephemera may be interesting to students of martial arts studies for a variety of reasons.  When assessing this material, we are often drawn to photographic images that might reveal lost details of how things “were really done.”  I have come across a few truly useful ethnographic images in this series, but in most cases even the best of these antique photographs suggest more about the ideas and the intentions of the individuals who captured them than the actual lived experience of China’s many martial artists.

In practice photography, which always seems to be “realistic,” was often used to create mythological images of these fighting systems.  But this essay will focus on the commercial distribution of other sorts of images.  Specifically, we will briefly discuss the rich history of hand painted postcards as well as paper-cut and “macerated stamp” collages produced in China.  Freed from the constraints of realism these genres of commercial art gave both consumers and producers the freedom to imagine a starkly romanticized vision of the Chinese martial arts that stood in direct contrast to the often-bloody images of the Boxer Rebellion period and the Yellow Peril literature it inspired.  In some ways they even reflect the idyllic and vaguely spiritual values that current students still seek to find as they turn East.

Many of the most striking late 19th or early 20th century images of the Chinese martial arts were circulated on delicately hand painted postcards.  Produced in handicraft shops such images could be purchased at hotels in cities like Shanghai or Hong Kong and mailed back to friends and family in the West.  In a few cases Western consumers simply added their own visual impressions to blank cards before mailing them off.

Hand painted cards are now a sought-after collectors’ item and their price tends to vary with the condition, quality and subject matter of the card.  As such it will come as no surprise that I have never managed to add one to my collection.  Prices for these cards are often in the hundreds, if not thousands, of dollars.

However, there is a related class of images that are more commonly encountered.  These are mass produced printed cards designed to look as though they are hand painted.  One of the best examples of this genre that I have encountered was distributed by the Soy Kee & Co. curio shop located at 7 and 9 Mott Street in New York City’s turn of the century Chinatown.

Soy Kee & Co. was one the neighborhood’s better-known establishments.  Located just beneath the landmark Port Arthur restaurant, they did a brisk business importing everything from porcelain to silks, and their wares were sought after by both tourists and designers decorating some of New York’s more luxurious homes.

Soy Kee & Co. advertised aggressively in many mediums.  Collectors sometimes encounter early cards distributed by the store that are almost a hybrid of the old Victorian tradition of collectible “trade cards” and new developments in the world of postcards.  When added to a collection such ephemera could function as a uniquely durable form of advertisement.

Most of their “painted” cards showed civil scenes, but this image is the exception.  In it we see a young man performing some sort of spear set.  He is dressed in red and green and wears a blue urban.  The shaft of his spear is painted red (which was common during the Qing) and has a red tassel.  The image itself contains an interesting sense of movement and flow.

We can date the production of this postcard with some confidence, even though it was never mailed and lacks a postmark.  On the reverse we read “Private Mailing Card: Authorized by Act of Congress 1899.”  This label was required by law on privately produced postcards between 1898 and 1901.

Half of this time frame overlaps with the Boxer Uprising, which was a major media event within the United States.  Perhaps this card was produced to capitalize on the sudden ubiquity of Chinese Boxers in the press?  Or maybe the image was produced on the cusp of the crisis as a stroke of good luck?  One must wonder how the Boxer Rebellion affected the market for Chinese art and porcelain in New York City.

Beyond the question of timing there is also one of artistic influence.  The posture of the spearman, his weapon and the stark background, are all highly reminiscent of other sorts of export painting produced in China during the middle of the 19th century.  These watercolors were beautiful but very delicate. They were exactly the sort of item that a shop like Soy Kee might be expected to carry.  One wonders whether the store’s owner just commissioned a reproduction of an image that they already owned.  If so, this postcard represents an important image of the traditional martial arts, produced by Chinese artisans, on the cusp of the Boxer Uprisings that was then mass produced for American consumers.

Between the turn of the century and the 1940s collage-type postcards were also hand produced in workshops in China.  These mixed medium artifacts took many forms.  A background landscape was first applied with pencil, ink and watercolors.  These could be either lushly produced or relatively simple and tended to feature 3-6 colors.  These cards were both sold in China and produced for export.  Their backgrounds tended to feature exotic and idealized landscapes reminiscent of Willow Ware patterns.

A main figure was then applied to the card that was equally Orientalist in its appeal.  These collages might be constructed out of macerated stamps, carefully cut strips of money or layers of decorative paper.  Occasionally features like hands or faces would be painted directly on the card giving the image a greater sense of depth or texture.

The postcard at the top of this post is a collage constructed from various bits brightly painted and inked paper.  The warrior’s body, face and hands all seem to be made of separate applications.  The blade of his jian, however, is inked directly onto the card.  The white sections on the back of his armor and leg are areas where the bare card stock has been allowed to show through.

The back of the card is somewhat interesting.  Because it is an undivided back with no space for a message we can confidently date this image to sometime between 1901 and 1907.  However, postcards of similar construction continued to be produced through the 1940s.  They will have split backs, with a space for both a mailing address and a message.  This example was apparently used as a hand-delivered Christmas card.

The next example is a mixed medium piece utilizing a hand colored background and a figure crafted from carefully trimmed postage stamps.  The swordsman’s face, and the feathers on his cap, have been hand painted.  The rest of the figure is constructed from overlapping layers of stamps.  The back of this card is undivided as well suggesting an early 20th century date.

It is interesting to compare these two swordsmen.  The armor, helmet and face of the paper-cut figure seem to invoke the sturdy heroes of the Water Margin or some other classic martial novel.  Set against the rustic stone bridge viewers would probably guess that they are looking at a legendary or even mythic figure.

The landscape of the final card is more stylized, and the reclining flowering tree in the upper-right hand side of the card adds a touch of sophistication.  But I find the overall effect of this card to be quite different.  Or perhaps it would be better to say that it invokes a distinct set of Orientalizing myths.

In contrast to the rugged features of the first figure, the round face, spectacles and thin mustache (as well as the feathered hat) all suggest that this is an image of a very different sort of figure.  He appears to be a government official or military officer of the Qing regime rather than an ancient hero.  Whereas the paper-cut figure invokes the strength of China’s past, its counterpart creates a sense of unease as it emphasizes the degree to which the nation’s government, and even its military, are out to step with the modern world. 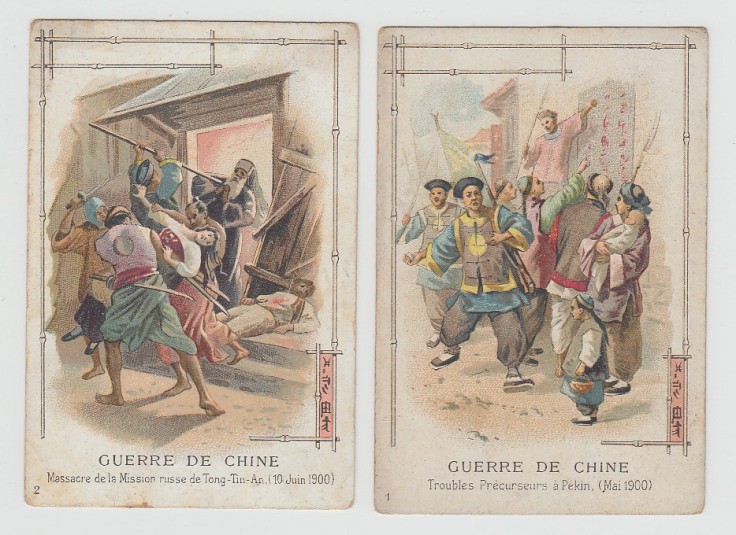 Perhaps the most remarkable thing about these three postcards is that they were all produced and consumed within a few years of the Boxer Uprising.  This crisis had a marked impact of the way that China was imagined in the West, and neither newspaper accounts or Yellow Peril novels cast Chinese martial artists in a positive light.  We have already reviewed several postcards produced in the aftermath of the Boxer Rebellion that focused on scenes of massacres, where individuals with swords butchered Christian converts. Other cards attempted to mock Chinese martial artists as backwards and delusional.

Those postcards were produced in the West for Western consumers.  While the three cards presented here also sought an occidental audience, they were produced in China.  And the involvement of Chinese artists seems to have made a substantial difference in their vision of the martial arts.

Rather than the bold nationalism that would come to dominate Republic era thinking during the 1920s-1930s, these images still painted the Chinese martial arts in quaint and antiquarian terms.  But gone are the overtones of sadism and ignorance that anchored so much of the popular art to emerge from the Boxer Rebellion.  In its place, we have the subtle reminder that China’s heritage can be a thing of both wonder and beauty.  At minimum, it is something that Western consumers might be interested in investing in.  That heritage is seen to live on in its martial artists, both the heroes of mythic stories and the more prosaic (and bespeckled) figures that one might encounter in the late Qing.

Andrew Morris, Brian Kennedy, Judkins and Nielson, Douglas Wile and Stanley Henning have all discussed the ways in which Republic era martial arts reformers sought to re-imagine these practices as repositories of national strength and identity.  Indeed, the Chinese government is still attempting to promote its soft-power agenda by cultivating an interest in these practices.

The existence of these postcards suggest that this basic strategy may have emerged earlier than one might suspect, almost directly from the ashes of the Boxer Rebellion itself.  Likewise, in the hands of Chinese publishers and artists the traditional fighting systems could be made attractive to Western consumers even while sensationalist images of horror and gore were still easy to come by. This suggest the early circulation of not just one mythology of the Chinese martial arts, but many.