Through a Lens Darkly (35): Chinese Soldiers and the Ring Hilted Dao (Saber)

Today’s post is an early Christmas gift.  When I first decided that it would be wise (for research purposes) to collect and catalog images of period martial artists, I was faced with a couple of dilemmas.  Perhaps the most pressing was to determine what constituted a photo of a “martial artist.”  The realm of hand combat instruction in China was filled with all sorts of figures, from opera singers to private security guards and even bandits, who depended on the martial arts to make a living.  Yet they do not all fit into a modern understanding of “proper” kung fu students and schools.

Soldiers also fall into this category.  For many individuals the martial arts were a very practical educational choice to prepare for a career in the military.  So under what circumstances is a photo of a late 19th century soldier also a potentially important image of a martial artist?

My answer to this question has shifted over the years.  At the moment I have decided that a soldier is also a martial artist if he is acting as such (for instance, practicing archery) or displaying either objects of values associated with Chinese martial culture (e.g., one occasionally finds photos of soldiers participating in lion or dragon dancing at festivals).  I will be the first to admit that this is more of a rule of thumb than a comprehensive typology for classifying images.  Unfortunately I had yet to work even this out when I first began collecting period postcards and photographs.

You can see a scan of one of the very first postcards that I puzzled over at the top of this article.  For reasons that I have not entirely worked out, some of the best photos of early Chinese martial artists appear on Russian postcards.  Soldier and martial artists were also plentiful in the British, American, Japanese, German and French spheres of influence.  And over the course of this series we have seen interesting images emerge from all of these geographic areas.  But for some reason, whether it was local culture or consumer demand back in Europe, martial images seem to have made up a larger percentage of the Russian catalog.

The image at the top, which probably dates to the very end of the 19th century or the early 20th, shows a Chinese military officer flanked with four soldier who appear to be armed as his personal guard (recall that regular troops in China in the early 20th century generally carried rifles). When I first saw this postcard I was fascinated by the image.  Not being able to read Russian I am not exactly sure where the photo was taken, but one can clearly see the crenelations of a fortress or city wall behind them.  These were quite common in northern and central China at the end of the Qing dynasty.  Even more interesting are the long, ring hilted, sabres carried by each of the soldiers.  The central officer is armed with what appears to be a European style blade.

Unfortunately I decided that these particular soldier were not a “priority” and I passed on the image.  I immediately regretted that decision and spent the next three years looking for another copy of this postcard.  Earlier this month two examples hit the market at exactly the same time.  Luckily I managed to snag one and am now sharing my good fortune with you.

One might assume that such a long search indicates that the image in question was very rare and had little impact on anyone’s perception of Chinese culture or the martial arts.  That is probably not the case.  I suspect that this image was actually quite popular.  Each of the three examples that I have come across in the last few years is slightly different from the others.  This indicates that each of these examples (see below) comes from a different printing of the card.  It must have been commercially successful to warrant this degree of sustained attention.  The scarcity of this image today is probably a better indicator of the incredibly low survival rates for all sorts of ephemera rather than its circulation figures at the time. 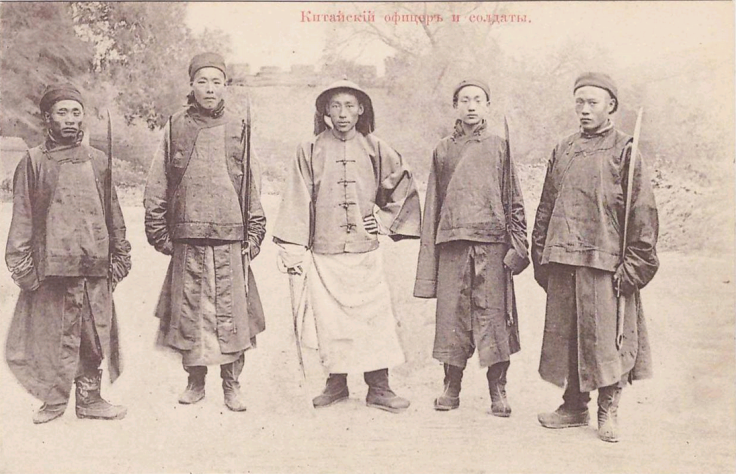 Taking a Closer Look at the “Tai Chi Saber”

From a martial arts perspective, the most interesting thing about this image is the swords (or more properly dao) carried by the soldiers.  Pay special attention to the “S” shaped guards, cord wrapped handles (probably over wood scales) and ring pommels seen on each weapon.  Occasionally one sees modern interpretations of this basic blade shape marketed as the “Tai Chi Saber.” The weapon even seems to have achieved a degree of popularity among practitioners of certain forms.  Needless to say this is not an “official” name for these sorts of swords.  Chinese martial artists, in general, seem to have employed the weapons that were at hand rather than commissioning specific designs for their local styles. Instead this was a style of dao that was popular in northern and central China from roughly the middle of the 19th century to the 1930s.  It was carried by a wide range of local militia members, bandit forces, security guards, martial artists and apparently even some more regular soldiers.

One of the reasons why this image has always fascinated me is that I have owned a couple of these swords over the years.  I would have loved to provide detailed photos of one of these blades as it is a pretty close match to the examples in the postcard.  Unfortunately that weapon is currently on loan to my Sifu on the other side of the country.  Instead I found a couple of examples that were posted over at Swords and Antique Weapons for study purposes that may help to shed some light on what these blades are like for anyone who has not had a chance to handle one.

The first of these is the sort of blade that may have been used as a presentation sword or carried by more elite guards whose employer was looking to make an ostentatious statement.  This particular sword is 111 cm long (about 44 inches).  Its blade is decorated with both piercings and fullers, and the spine has been incised with a bamboo pattern.  That last flourish actually seems to have been somewhat common on these swords and can even be seen on my own, much more plebeian, example.

In general these swords are lighter and faster in the hand than you might expect given their length and width.  This is possible as the profile of the blade is rather thin and flat coming to a sharp edge optimized for slicing rather than bashing armored targets.  As you move towards the tip this tendency becomes even more pronounced, much as you might expect with an ox-tailed dao of the same period.  Of course one has to be careful making generalizations about blades of this era as they have often been polished more than once and this can change both their weight and geometry.  If you see one of these swords with a oddly rounded tip and fullers that lack definition or depth, this is an indication that you are dealing with a “tired blade” that has seen too many polishings.  Given the lengths and weight of the handle, it seems that many of these swords could have been used with either one or two hands.

The second example of a blade of this type is more typical of what one might encounter today.  Because these swords appear to have been popular with civilian martial artists and militia members, they show up on the antique market with some frequency.  Unfortunately a lot of these swords are in “relic” or “dug” condition.  Still, it is possible to get a real sense of how they would have handled, and many of them are sturdy enough for forms practice.  Needless to say, all of the normal disclaimers about the proper inspection and careful use of antique weapons apply here.

This more typical sword is about 93 cm in length, 69 of which is blade.  Aside from that, the basic profile of the blade appears to be similar.  It was also a nicely decorated weapon in its day.

Over the years I have seen some discussion of these swords and whether they could be considered true “military” weapons or if they were the exclusive domain of civilian martial artists.  In a sense these sorts of questions are impossible to answer because of the ever shifting boundaries between the “official” military, sanctioned and unsanctioned local militias, bandit groups and warlord armies.  Soldiers and even important commanders moved back and forth across these lines and when they did they took their weapons with them.  Thus what one might encounter at any given garrison in the final years of the Qing dynasty might deviate substantially from the official regulations for the Green Standard Army. Still, the postcards discussed here provide a suggestion that at least some of these swords ended up in military hands.

If you enjoyed this post you might also want to read:  Through a Lens Darkly (18): Chinese Martial Arts and Early 20th Century Cigarette Cards: Building the Global Image of Kung Fu.

2 thoughts on “Through a Lens Darkly (35): Chinese Soldiers and the Ring Hilted Dao (Saber)”