Through a Lens Darkly (47): The Sword Shops of Beijing’s Bow and Arrow Street

Looking over my posts from the last few months I realized that it has been too long since we discussed new (to us) images of the Chinese martial arts.  In this post our friend Sidney Gamble will help to rectify that oversight.  Regular readers may recall that Gamble was an American sociologist who documented daily life in Republican China’s major cities.  His observations were recorded in several academic books.  Yet Chinese martial artists are likely to be more familiar with his passion for photography and amateur film making.  Some of this material found its way into Gamble’s various publications.  But he left behind a much larger archive of images, most of which was only discovered after this death.  We have already discussed the importance of his recording of the “Five Tiger Stick Society” and the Miaofeng Shan pilgrimage.

While northern China’s martial artists were never a subject of sustained study, Gamble’s interests in urban sociology seems to have brought him into frequent contact with such individuals.  Both his professional and personal interests ensured that he would spend a great deal of time exploring, and photographing, China’s marketplaces and festivals.  These were also great places to find martial artists, opera performers, patent medicine salesman, soldiers and a wide variety of other colorful characters.  From time to time such figures would make it into his books.

The photographs discussed in this essay explore the nexus of his encounters with marketplaces and the martial arts.  As part of his effort to document China’s changing cityscapes, Gamble took many pictures of Beijing’s shops and storefronts.  Some of these buildings were quite humble.  Others featured elaborately carved wooden screens and bright tile work.  He was particularly taken by the almost universal habit of fashioning shop signs from the objects that one sold.

Its hard to think of a better way to advertise one’s wares, and such signs might appeal to customers with limited literacy.  Still, a number of these signs also featured written descriptions, and various trades seem to have had their own stylized approach to signage.  Nowhere was this more evident than in the shops selling swords and knives.

Gamble photographed at least three different sword shops during his survey of Beijing’s markets.  Each sign was constructed of seven to twelve wooden sword replicas suspended one above another.  Perhaps the shape of the sign was meant to remind patrons of blades of various sizes and shapes on a rack.  Most of these wooden replicas portrayed the single edge dao, but occasionally other weapons appeared including spears heads, daggers or short and sturdy dadao.

I was somewhat surprised when I first came across these images.  The commonly heard troupe is that the Qing dynasty outlawed the civilian ownership of weapons as well as the practice of the martial arts so such things could only be found in secret societies.  Still, period accounts of the final decades of the dynasty (when the countryside was littered with militias and awash in traditional arms) would strongly suggest that those regulations were often observed only in the breach.  While researching accounts of the Boxer Rebellion I ran across one ominous note recounting how all of the storefronts in Beijing put up signs advertising swords and knives as the displaced Yihi Boxers streamed into the city during the spring of 1900.

Period observes noted that the market for swords and other traditional weapons had been in serious decline from the final decade of the 1800s onward. I assumed that the industry would have basically collapsed by the 1930s.  Apparently that was not the case, and a variety of weapons continued to be created, collected and sold in the sorts of small shops that Gamble frequented.  Indeed, as the following quote indicates, they continued to be indicative of the types of handicraft manufacturing that dominated much of Beijing’s economy.

In the northeast corner of the district was a group of streets, Kung Chien Ta Yuan (Bow and Arrow Street, that was as interesting as any we found in the city.  There, away from the bustle and traffic of the highway, were grouped the shops of the bow and arrow makers, some making long bows and others feathered-tipped arrows, others making cross bows to shoot clay marbles.  And many a boy can be seen bringing home a string of small birds that he has shot with one of these cross bows.  Then there are gold and silver shops where men, sitting on benches like saw horses and working with simple tools, make dishes of elaborate pattern.  In one corner is a shop where the men are busy cutting out saddle trees and making material for boxes, while just next door they are making copper kettles, dishes and pans, starting with the sheet copper and gradually beating it out with hammer and anvil into the desired shape and thickness.  There are stores occupied by the curio dealers with their assortment of porcelain, bronze and other things, wonderfully interesting places to spend an hour and keen men with whom to make a bargain.  Besides these there are cloth and tea shops, pipe stores, shops where they make reed mats, another for paper clothes, silk thread stores, a sword shop and one that deals in pig bristles. (Sidney David Gamble, John Stewart Burgess. 1921. Peking: A Social Survey. New York: George H. Doran Co. P. 322) 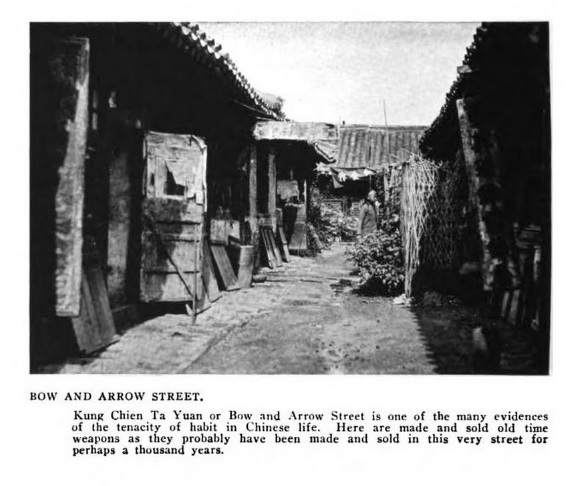 After reading this excerpt from Gamble’s survey, the next question must be, who patronized these sorts of shops?  Unfortunately, his writing gives no indication of who was buying traditional recurved bows in the 1920s-1930s.  But the patrons of the various sword shops do make the occasional appearances in his work.  Most often they can be spotted on the more vibrant market streets closer to the highway or at local festivals.

Through his films we have already met the 13 martial arts societies that took part in the annual Miaofeng Shan pilgrimage, which was an important social event in the Beijing area during the 1920’s.   Clearly schools and temple societies such as these would have patronized the shops that Gamble recorded on Bow and Arrow street.  And we have already reviewed numerous accounts of the sorts of martial artists, strongmen and patent medicine sellers that one was likely to encounter in more ordinary marketplaces.  Luckily Gamble also recorded some important images of these individuals.

Yet ever the sociologist, he was more interested in the question of how martial arts groups related to society, rather than simply seeking out feats of arms.  That turns out to be an interesting question as a great many martial arts schools in the 1920s-1930s had committees to provide either basic services to their members, or to raise money for community causes.  When we look at the groups that these martial arts schools cooperated with in their charitable work, it’s a little easier to see where they fit in the broader social structure.

Some $300 is annually raised for the chou ch’ang by a three day benefit given on the grounds of the Peking Water Company, outside of the Tung Chih Men.  This consists of an entertainment of singing, acting and acrobatics given by some nine groups of men who not only come and give their services but often pay their own expenses as well.  These men usually belong to some club or secret society and come year after year to make their contributions to the poor of peking.  One of these clubs, the Cloud Wagon Society, sent 40 members for the three days and subscribed $35 for their expenses.  This group sang old Chinese folk songs.  The Old Large Drum Society, founded in 1747, sent a group of 60 dancers and musicians.  The Centipede Sacred Hell Society, with some thirty-five members, gave demonstrations in the use of the double-edged sword, chains, pikes and other implements of combat.  The Sacred Jug Society was a group of 15 men from the village of Tuen Van, who amused the crowd by juggling jugs.  A group of actors gave their plays walking and dancing on four-foot stilts.  The Old and Young Lions Sacred Society made sport for the people with five lions of the two man variety, and whenever the lions moved the drum and cymbal players were sure to call attention to the fact by beating on their instruments. (Sidney David Gamble, John Stewart Burgess. 1921. Peking: A Social Survey. New York: George H. Doran Co. P. 208).

For better or worse, Sidney Gamble never set out to document China’s Republic era martial artists.  Perhaps that is just as well.  It is all to easy to read only the discussions of a single topic that interests us and begin to assume that such practices were omnipresent.  The challenge facing students of Chinese martial studies is not only to reconstruct the history of these fighting systems, but to understand their place in a much broader society where most individuals had little interest in the subject.

Gamble’s work is interesting to me precisely because it never places the martial arts at the center of the discussion.  And yet, these topics and practices are never totally out of view.  Even Beijing’s foreign residents and newspapers followed (from a distance) the developments of the Jingwu or Guoshu associations, and everyone could relate stories of particularly impressive (or pathetic) marketplace performances.  Yet far from being the center of the social universe, these martial organizations and practices remained one social movement among many.  The key to winning influence was in the friends you made, and how the martial arts sought to rhetorically position themselves.

Historians are most familiar with the modernist (Jingwu) and statist (Guoshu) discourses seen in the major reform movements of the period.  Yet in Gamble’s various home movies, photos and written accounts we see smaller martial arts groups continuing to be involved in local events and making common cause with other guardians of China’s performance and folk cultures.  In recent years this pathway (mostly ignored by elites in the 1920s) has come to the fore as China’s “folk” martial artists have attempted to position themselves as the vanguard of attempts to promote the nation’s “intangible cultural heritage” both at home and abroad.  Gamble’s work suggests that perhaps we should also be looking to the fruitful 1920s to locate the origins of this movement as well.

If you are interested this you might also want to read: Collecting Chinese Swords and other Weapons in late 19th Century Xiamen (Amoy)

5 thoughts on “Through a Lens Darkly (47): The Sword Shops of Beijing’s Bow and Arrow Street”